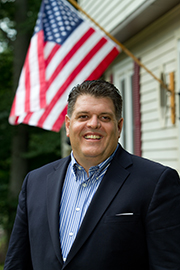 State Representative David Rutigliano is currently serving his fourth term in the Connecticut General Assembly representing the 123rd District – which represents most of Trumbull. He is currently the ranking member of the General Law and also sits on the the Labor Committee, and Finance Committees. He also serves on the Regulations Review committee.

First elected on November 6, 2012, Rutigliano is a small business owner with over 18 years of experience creating jobs. He is a partner in the local SBC Restaurant Group, which owns and operates Southport Brewing Company, Local Kitchen & Beer Bar, and the Sitting Duck Tavern.  David has created over 300 jobs in Connecticut. Rep Rutigliano has taken his many years of experience running a business and participating in the Connecticut economy, and brought those skills to Hartford in an effort to improve the state’s economic situation and increase opportunities for job growth.