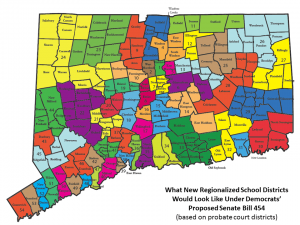 While encouraging towns to share services is a laudable goal, forcing towns and cities to regionalize their school districts without considering their unique needs creates a whole host of problems:

Less time in the classroom and more time on the bus, especially in rural areas where proposed districts would be very large geographically.

Wasted taxpayer investments in new and newly renovated schools. If your town just invested in a new school renovation, it may now be all for nothing if the school no longer fits the needs of a regional school district.

Raises concerns about how to preserve quality of education.

Loss of teaching positions. If towns are forced to consolidate, this could impact number of teachers and classrooms.

Loss of local control over school decision making. Forcing regionalization leaves little room for towns, cities and local residents to have a say in what happens.  Want to speak out about this proposal? I will let you know once a public hearing is scheduled so you can submit testimony or testify in person at the State Capitol.

As always, please do not hesitate to contact me should you have any questions or concerns relating to state government at john.piscopo@housegop.ct.gov or at (800) 842-1423.