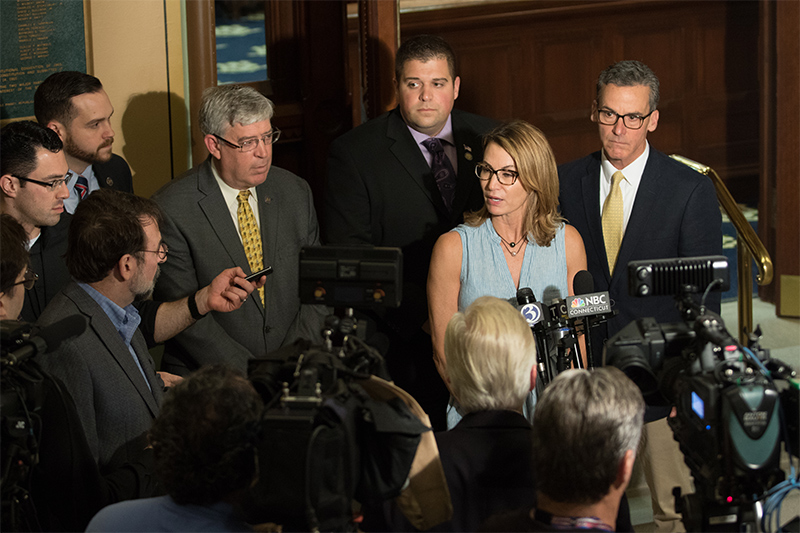 HARTFORD – House Republican Leader Themis Klarides and her colleagues this week called for an up-or-down vote Thursday in the House on the balanced, no-tax increase Republican budget – the third one her caucus has produced – noting the Democrats have failed to produce a single proposal.

“The Democrats failed to come up with a budget during the regular session and it appears they will not have one by the end of the fiscal year Friday. House Republicans have produced three balanced budgets without increasing taxes that include significant structural changes and savings,’’ Klarides said. “We are calling for a vote on our budget Thursday when the legislature is scheduled to convene.”

She added, “Connecticut taxpayers and our towns and cities deserve more from their state government, and producing a budget is a basic requirement of leadership. The Democrats have so far failed in that task. Anyone who performed as they have at a private sector job would be fired. We are wading into dangerous territory where vital services are at risk, and where local officials cannot plan for the future.”

Republicans came up with a balanced budget this spring and then revised that proposal to account for a dramatic drop in revenues in late April. The Democrats did not even produce a plan by the time the legislative committees reached their deadlines later in the spring.

Klarides said the missed deadline and the prospects of a prolonged budget fight will result in huge problems for towns and cities that count on state revenue to help run local government. Those most at risk and in need of social services will also be affected.

“The fact is that had the Republicans been in control in Hartford we would have passed a budget,” Klarides said. “Our vision for the state is to control spending, impose structural changes will result in significant savings to guard against future deficits, and get a handle on exploding pension and healthcare costs. These are all core elements of our budget proposals.”

DOCUMENTATION:
Round 3 Budget changes: A list of major changes from House Republicans’ second budget proposal to our third proposal to keep our budget balanced. Most recently, we removed all fee increases and restored existing tax exemptions.

Appropriations: This is the budget. It shows how much House Republicans would appropriate to each account in the budget compared to the current year.

All Budget Changes: A list of every policy and current services update on the spending side of the House Republican budget.

Revenue Changes: A list of every policy and current services update on the revenue side of the House Republican budget.