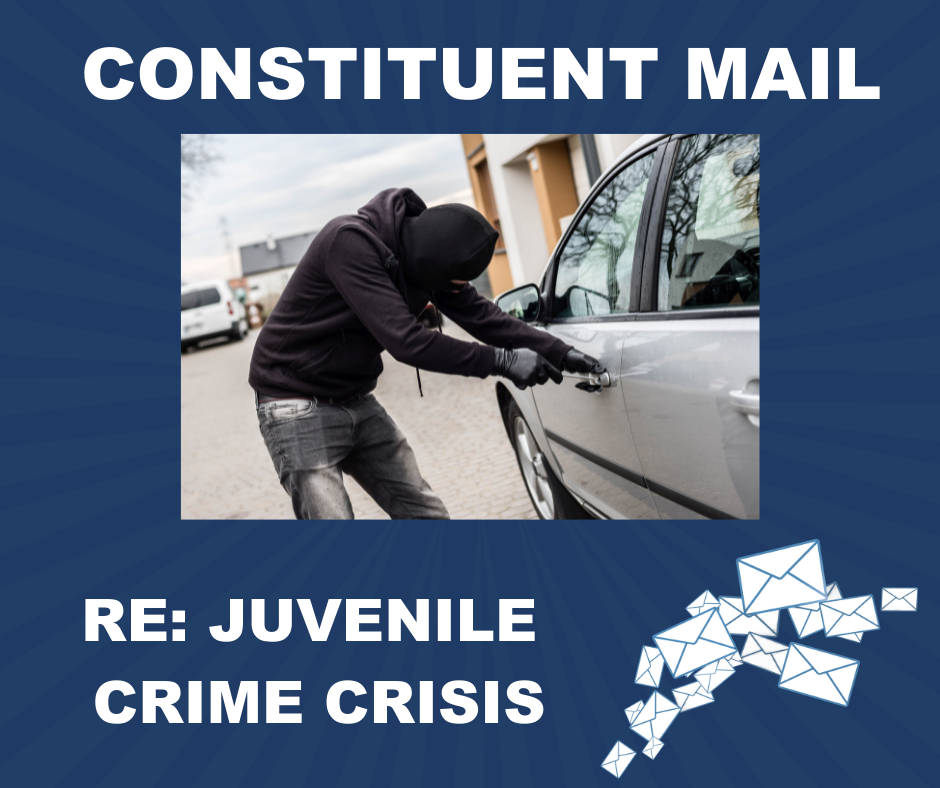 I have been contacted by several constituents about the recent uptick in juvenile crimes. Brian from Colchester sent a particularly thoughtful letter that he gave me permission to share. Please read it below:

“I wanted to reach out as a concerned citizen in regards to the numerous car break ins and thefts that have been happening across the state for years now. Especially with the recent stolen car incidents in Glastonbury and New Britain, I feel something needs to be done before the situation gets worse. As a new homeowner in Colchester, I’m constantly worried about making sure my doors are locked and driveway is well lit…something I never had to worry about growing up. Unfortunately with the state’s lack of support for the police department and the state’s poor stance on gun laws and self defense; I have no option other than to keep my finger’s crossed that criminals only take what’s in my car and not the whole thing. While keeping my cars locked and house lit is great, this only encourages the thief to go next door and rob others in my community. This is NOT how we should be reacting to this situation.

Currently it seems that the lack of repercussions being enforced on the underage criminals is the biggest contributor to these incidents. The fact that anyone under 18 is able to repeat offenses and get away with this actions is ridiculous. If someone is old enough to work and drive a car, they are old enough to make the right decisions and face consequences. We expect high schoolers to pick their careers by 18, but can’t hold them accountable for their actions?? Car thefts and break ins are almost a daily occurrence on town Facebook pages, and the police are helpless due to the timing of the incidents and restrictive police laws.

As a representative of our community, I plead that you work diligently to come up with a solution before more dangerous and potentially deadly acts occur. The lack of action and response from our governor and other political parties in the state is appalling. I hope this letter does not fall on deaf ears, as I am writing on behalf of hundreds of other people.