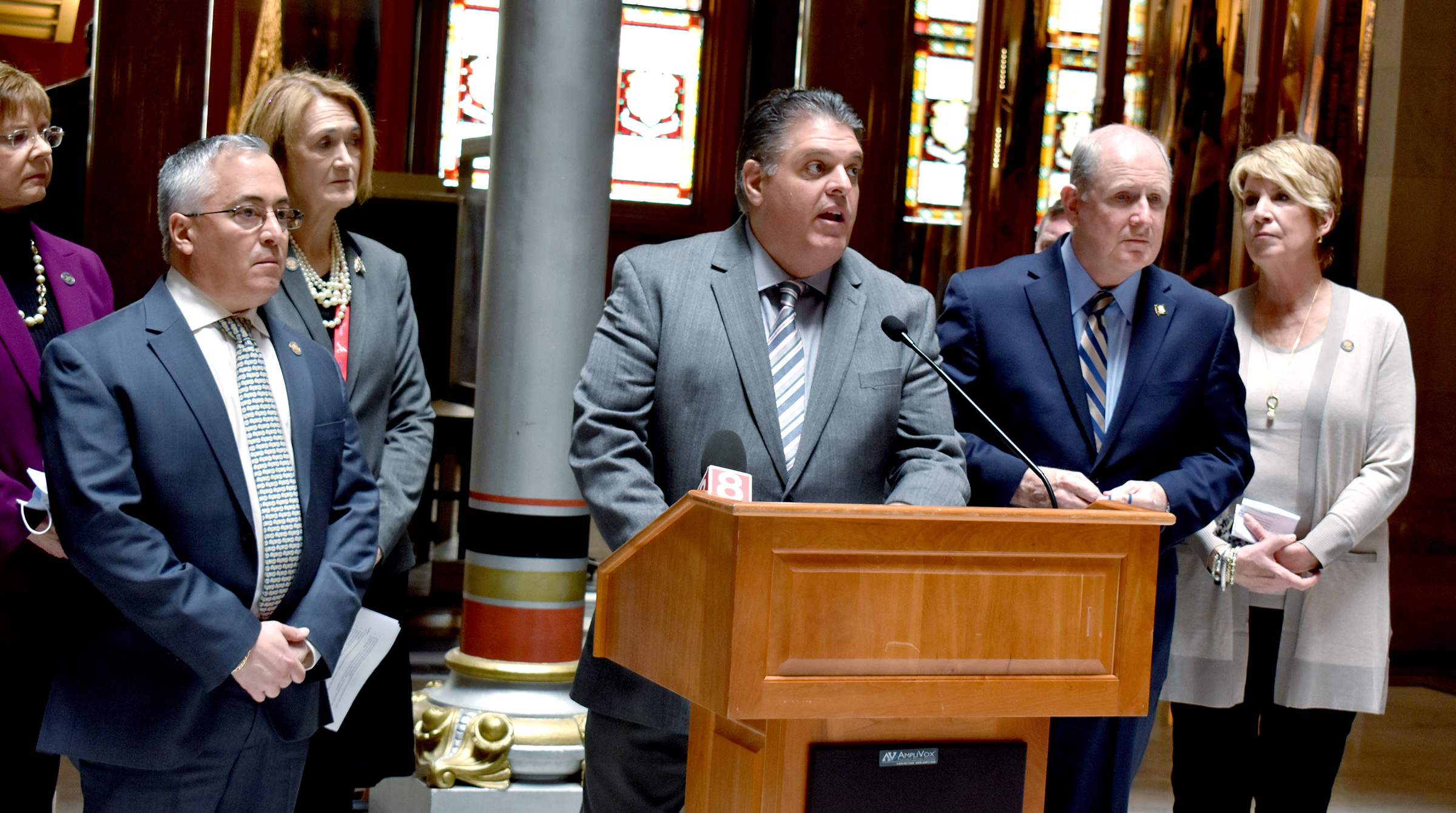 HARTFORD—House Republicans on Wednesday again called for the elimination of the highway use tax (HUT) on heavyweight trucks as Democrats say they now want to exempt the agriculture industry from the controversial tax they approved during the 2021 legislative session.

“The absurdity of the policy-making strategy from majority Democrats was on full display today as they stood alongside the Connecticut Farm Bureau to talk about the need to provide that sector with relief from a tax their party voted for a year ago despite repeated warnings that it would hurt agricultural-related businesses,” said House Republican Leader Vincent Candelora said. “It’s no wonder Connecticut residents and businesses just can’t get ahead—the two steps backward, one-step forward approach from Democrats has made our state uncompetitive in the nation’s business landscape and unaffordable for residents.”

Candelora, with House and Senate Republicans, held a news conference Wednesday after Democrats stood with the Farm Bureau in calling for a suspension of the HUT tax that is set to go into effect in January 2023. Republicans criticized legislative Democrats for calling for the agricultural exemption even though they have refused to take up a Republican bill in the Finance Committee regarding the HUT tax.

Republicans said the Finance Committee should have a public hearing on the issue to allow industries beyond the agricultural sector to weigh in on the subject.

“Simply put, the truck milage tax will make everyday goods and services more expensive for Connecticut residents, especially at a time of supply chain disruptions, spiking fuel costs, and inflation,” said Rep. Tami Zawistowski (R-61), member of the legislature’s bipartisan Rural Caucus. “Yes, this tax should not be levied on agricultural trucking – but it should not be levied on anyone else, either. Democrats seeking additional carveouts to the truck mileage tax for political purposes underscores just how flawed the legislation passed last year really is. During last year’s debate, Democrats in the legislature rejected amendments offered by Republicans to exempt agricultural trucking and wholesale food vehicles. I think it would be best if we decided to do away with this tax in its entirety before it’s implemented.”

Democrats, before voting for the truck tax last year, rejected two Republican amendments (LCO 10638, 10647) in the House of Representatives that would have exempted agriculture-related trucking as well wholesale trucking for food delivery.

“Now that some in the legislative majority see the potential pain their tax will inflict on the state’s farming community, they want a political do-over,” said Rep. Laura Devlin (R-134), Deputy House Republican Leader. “The truth is the ‘truck tax’ was bad policy then and it’s bad policy now that will negatively affect the cost of everything we buy as consumers not just agriculture products, particularly as diesel fuel prices hit $5.12 a gallon.”

Rep. Cindy Harrison (R-69), a farmer and member of the Farm Bureau, helped lead House debate in 2021 over the truck tax’s impact on the state’s agricultural industry.

“For Democrats to come out now during an election year and claim they’re concerned with highway use taxes that they voted to pass just last session is disingenuous at best,” she said. “These very legislators voted against those amendments—I’m glad they’ve seen the error of their ways and understand that their previous support of these taxes will hurt Connecticut farmers.”

Rep. Holly Cheeseman (R-37), House Ranking Member of the Finance Committee, said she was disappointed that Democrats rebuffed her efforts to get the panel’s Democrat chairmen to hold a hearing on the House Republican bill to eliminate the tax.

“Beginning next year, just about every consumer good will be affected by the so-called highway user fee. At a time when our state’s revenues are surging to record levels, we should be looking at ways to ease the heavy tax burdens faced by residents, not adding to them,” she said. “This tax will make every day more expensive for residents and make our state even less affordable, especially those with low or fixed incomes.”

HUT is expected to raise $45 million in its first year and $90 million annually thereafter. Republicans, citing a substantial surplus in the state’s Special Transportation Fund, say the tax just isn’t necessary and should be repealed before it begins.