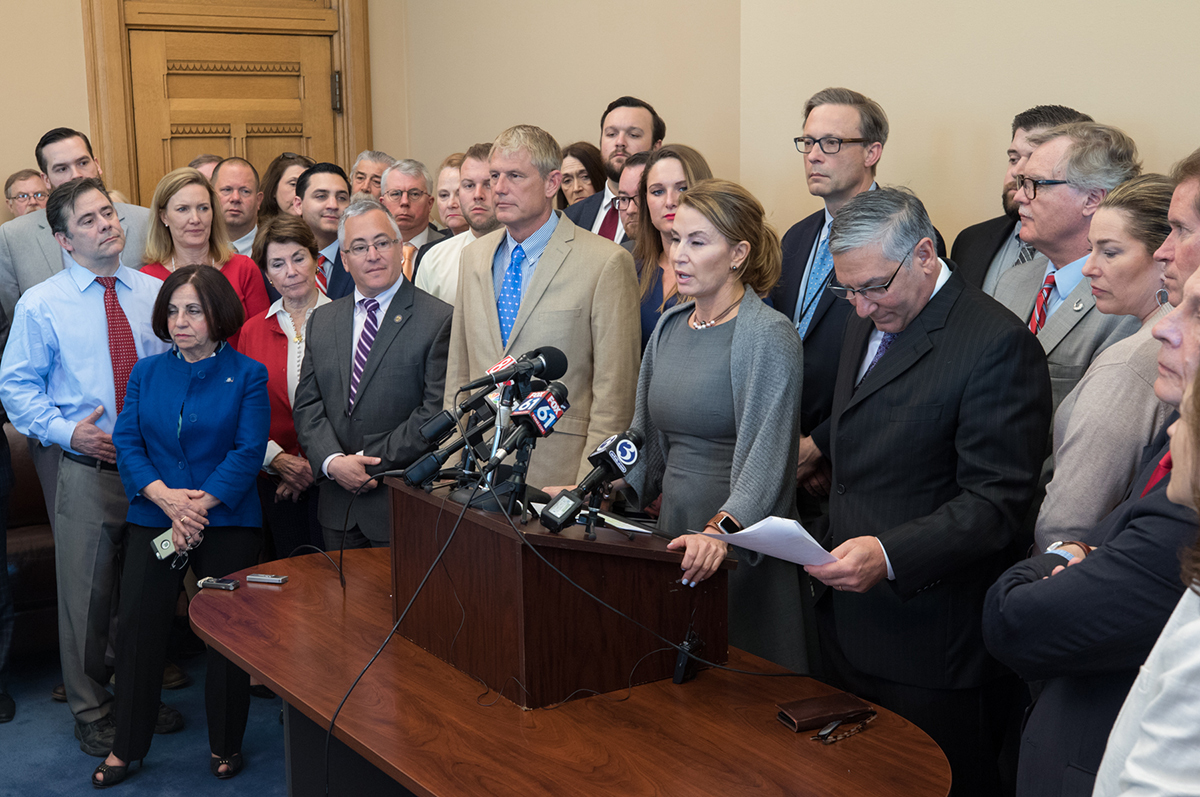 Focus on Stabilization of Connecticut’s Future

HARTFORD – Today Republican lawmakers released their second complete balanced budget proposal this year to stabilize the state budget in fiscal year 2019 and beyond.

The revised Republican proposal takes into consideration the revised projected deficit, the impact of a delay in federal hospital reimbursements which will boost revenue in fiscal year 2019 by over $400 million, and the need to restore the Medicare Savings Program in full. This revised plan fully balances next year’s budget, reduces future deficits, restores funding for the core functions of government, and does not include any new tax increases. It also implements policies to achieve long-term savings to create stability and predictability in future years.

“While on paper it may appear that the state is suddenly flush with new cash in fiscal year 2019 as a result of the hospital deal delay, we cannot let the overspending mistakes of the past be repeated,” said Senate Republican President Pro Tempore Len Fasano (R-North Haven). “We have to be responsible about how we budget if we want our state to grow, thrive and prosper. This budget proposal is about stabilization. We address the FY 2018 problem so we can focus on putting the state on the right path in FY 2019 and beyond. This revised Republican budget takes into account the revenue shift from 2018 to 2019 and manages this funding in a way that preserves core services without adding new unaffordable burdens onto our state. Year after year Connecticut has made promises it cannot afford to keep. This budget stops that practice. It gets our fiscal house in order today and puts Connecticut on a path to stability and predictability for generations to come.”

“This proposal not only balances the budget today, but results in significant long-term savings,” said House Republican Leader Themis Klarides (R-Derby). “Instead of making new promises that the state cannot afford in future years, it resolves today’s issues, upholds the state’s commitments to vulnerable populations, and reduces Connecticut’s future deficits and unfunded liabilities.”

“We’ve taken into consideration feedback from lawmakers on both sides of the aisle and we believe this revised budget is something both Republicans and Democrats can get behind as a pathway forward for our state,” said Senator Paul Formica (R-East Lyme) and Representative Melissa Ziobron (R-East Haddam), co-chair and ranking member of the state’s Appropriations Committee.

Recognizing the impact of the hospital deal delay and updated numbers, this revised budget would restore additional funding to core services beyond the initial Republican budget proposed in the Appropriations Committee. It would allow for full restoration of the Medicare Savings Program, additional funding for the Retired Teachers’ Health Care Fund, and eliminate certain savings that were criticized by Democrats in an effort to build consensus and garner bipartisan support. In addition, it contains no new tax increases, results in a surplus in fiscal year 2019 of $17 million, and contains policy recommendations that reduce the fiscal year 2020 deficit by $800 million.