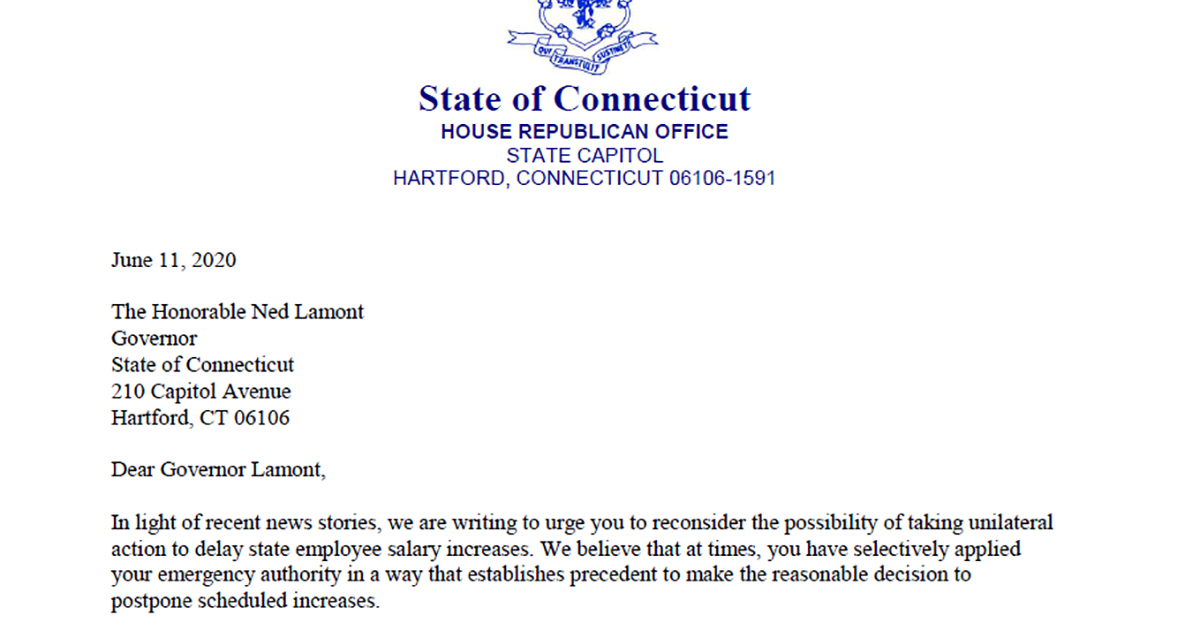 HARTFORD–House Republican leaders on Thursday wrote to Gov. Lamont, asking him to reconsider his recent decision against delaying scheduled salary increases for state employees as Connecticut tries to recover from the financial impact of the COVID-19 pandemic. Read the letter below, and see the original here.

In light of recent news stories, we are writing to urge you to reconsider the possibility of taking unilateral action to delay state employee salary increases. We believe that at times, you have selectively applied your emergency authority in a way that establishes precedent to make the reasonable decision to postpone scheduled increases.

To be clear, we are not asking for anyone to lose their job, and we are not asking any employee to give back any portion of what they currently receive. We are asking that in this time when businesses are closing and people are being laid off en masse, that you institute a delay of wage increases until your emergency authority expires on September 9th – less than three months from now. We are not saying that the cancellation of salary increases in unavoidable. A delay would give the legislature time to consider whether the $132 million cost can be worked into a state budget that will be in deficit approximately $2 billion next year.

One thing that the pandemic has proven is that not even our most cherished constitutional rights, nor most inviolable contractual provisions are sacrosanct during times of crisis. Over the past three months, you have made difficult decisions, which, during normal times, would not be tolerated, neither by the subjects of the decisions, nor by our courts. You shut down businesses. You intervened in contracts between boards of education and their contractors. You changed every residential landlord-tenant agreement in the state to the detriment of landlords. You limited our ability to move around freely and to gather with friends and family. And, not all of these decisions were made in the name of public health.

We know that you did not make these decisions in haste without due consideration, and to say that they were difficult decisions is a massive understatement. But given the circumstances and knowing the precedent you set with some of these other choices, it defies all common sense and any sense of fairness that you, as Governor during a once-in-a-century pandemic, would not have the legal authority to delay increases in state employee wages for less than three months.

While, we understand the political rationale for not making this change unilaterally, we are asking that you set politics aside, and do the right thing. If you thought a delay in salary increase was not right, I suspect you would have refused to even present this option to union leadership in the first place.

In the long list of difficult decisions that you have made over the past three months, it is incomprehensible that delaying wage increases for state employees is where you have chosen to draw the line and where you believe the state faces the greatest legal risk.

According to your budget office, since the start of the pandemic, the state and its municipalities have identified more than $700 million in pandemic-related costs. The tax revenue loss from diminished economic activity is expected to exceed $2 billion next year. And, our historic contributions to the Rainy Day Fund will likely be reduced to zero at the end of next year. Delaying salary increases is not a legally reckless decision. Certainly, any reasonable judge would recognize that this dire situation calls for such action.

Given the crisis we are in and the tough choices yet to come, we hope that you will reconsider the decision to not pursue a delay in salary increase. Once again, thank you for your efforts over the past three months.