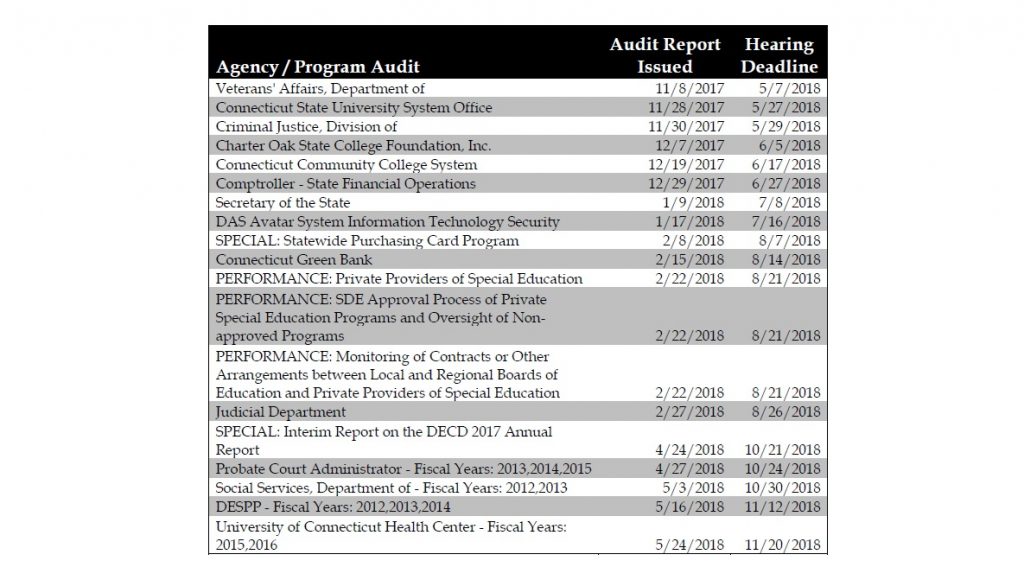 “The sheer magnitude of government mismanagement and questionable spending and hiring practices within state government has been repeatedly highlighted by the auditors in their oversight reports,’’ House Republican Leader Themis Klarides said. “Last year we succeeded in giving the proper legislative committees the authority to formally review these egregious practices within six months. Some of those deadlines have already passed and we need to act.’’

The provision Republicans inserted into the budget last fall allows for the oversight committees to conduct a review of the auditors’ reports within 180 days after they have been submitted. The hearing deadlines for three departments, Veterans’ Affairs, the Connecticut State University System and the Division of Criminal Justice will have expired by today with no action haven been taken on the reports.

Klarides has written to the leaders of the other caucuses, Republican and Democrat, and the chairs of the legislative committees that have gone past the deadlines to convene public hearings to address the auditor reports.

“These audits are very insightful and point out major policy changes that need to be made in the way money is spent and people are hired. It appears that taxpayer money has apparently been misused. The reports cannot just sit gathering dust in some state office,’’ Klarides said.

Klarides noted that some of the auditor’s findings have been repeated for various agencies meaning that the problems have not been properly addressed.