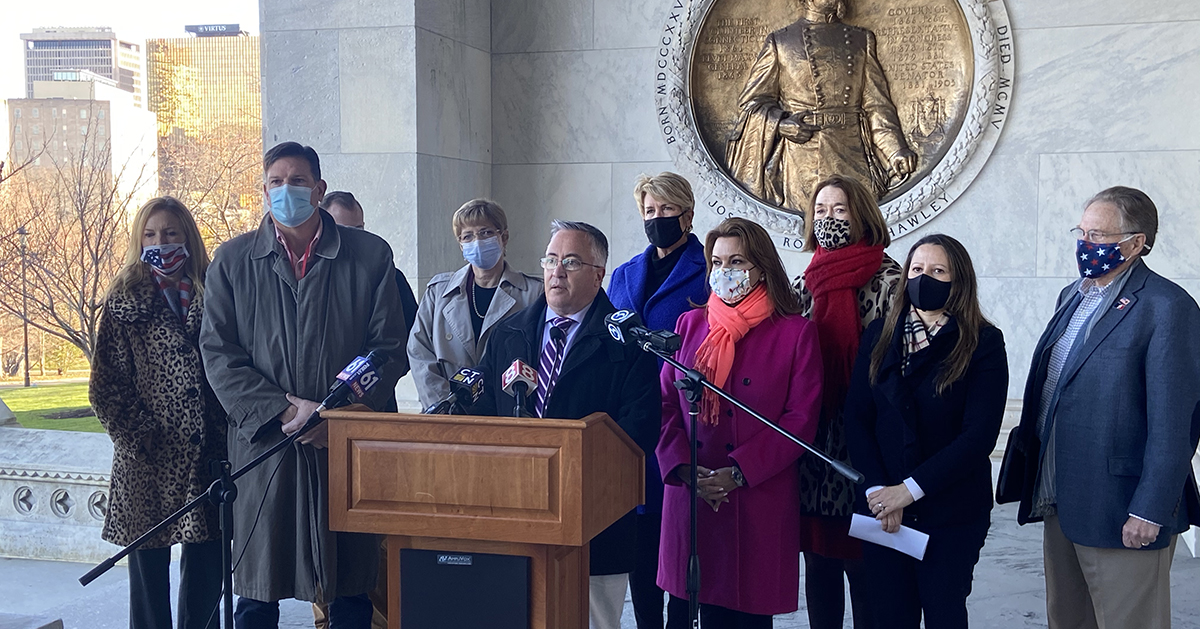 HARTFORD—House Republican Leader-elect Vincent Candelora on Thursday said Connecticut’s elected officials must intensify the state’s efforts to help job creators of all sizes, joining members of his caucus in urging action on items they say will ease burdens faced by pandemic-squeezed businesses.

“By many accounts, we’re at the precipice of a second wave—yet we’re miles away from any sort of cohesive, forward-looking effort to build an environment where businesses can recover. It’s still a day-by-day approach,” Candelora said. “Employers and entrepreneurs hold an expectation that policymakers should make their climb out of this nightmare easier, but it’s roughly nine months into this pandemic and struggling business owners continue to tell us that state government is falling short of making them feel like they’ve got a partner in this crisis.”

House Republicans on Thursday outlined actions that need immediate attention, including: shoring up the state’s Unemployment Compensation Trust Fund, allowing businesses more time to pay the second half of their personal property taxes, and delaying the implementation of the paid family leave payroll tax that will see the state take more money from the paychecks of cash-strapped employees.

“Administering grants and bridge loans using federal money is nice, but recovery is more than handing out taxpayer dollars. Heading into a second wave it’s critical that we focus on well-defined guidance and a comprehensive structure to enforce COVID restrictions rather than fine-based scare tactics that local leaders have no interest in lobbing at people on their main streets,” Candelora said. “Employers and residents also need a fully-engaged General Assembly whose members want to be meaningful partners in responding to the pandemic. Ruling by executive order should not be the norm, especially when the legislature heads into session in just a few weeks.”

The state’s unemployment compensation trust, funded by businesses, ran out of money in August. Connecticut’s Department of Labor has reported more than 1 million applications for unemployment benefits since March, and current weekly filers total 188,000. It’s anticipated that by December’s end Connecticut will have borrowed more than $800 million from the federal government to pay benefits. Employers, not state government, will have to pay back those loans—with interest that begins to accrue in the new year. House Republicans on Wednesday wrote to the state’s Congressional delegation urging an extension of the interest-free period.

“During our last economic downturn, the pressure created by increased unemployment taxes was a tremendous burden on our state’s job creators and was a real barrier to growing new jobs and helping businesses thrive,” Candelora said. “Any action we can take on this issue today, such as freezing the experiencing rating or dedicating federal dollars to the UI Fund, like other states have, will send the long-overdue message that the state is a partner in their recovery.”

House Republicans also said the governor should delay by 90 days the deadline by which businesses pay their personal property taxes, shifting it to April 1 from Jan. 1. The request is in line with a previous executive order (7s), and businesses would have to apply to the municipality for a deferral.

In a request to delay the payroll tax, Candelora restated his concern about the solvency of the new state-run paid family leave program, which won’t provide workers access to benefits for until a year after the mandatory paycheck deduction—affecting non-unionized employees only—starts Jan. 1. He said it’s the wrong time to install a new tax on struggling residents, while adding more state employees to administer a program that could have been managed by the private sector. Additionally, Candelora and House Republicans said it’s unfair to force employers to contend with program bureaucracy as they deal with the monumental challenge of simply keeping their business open in the face of crisis.