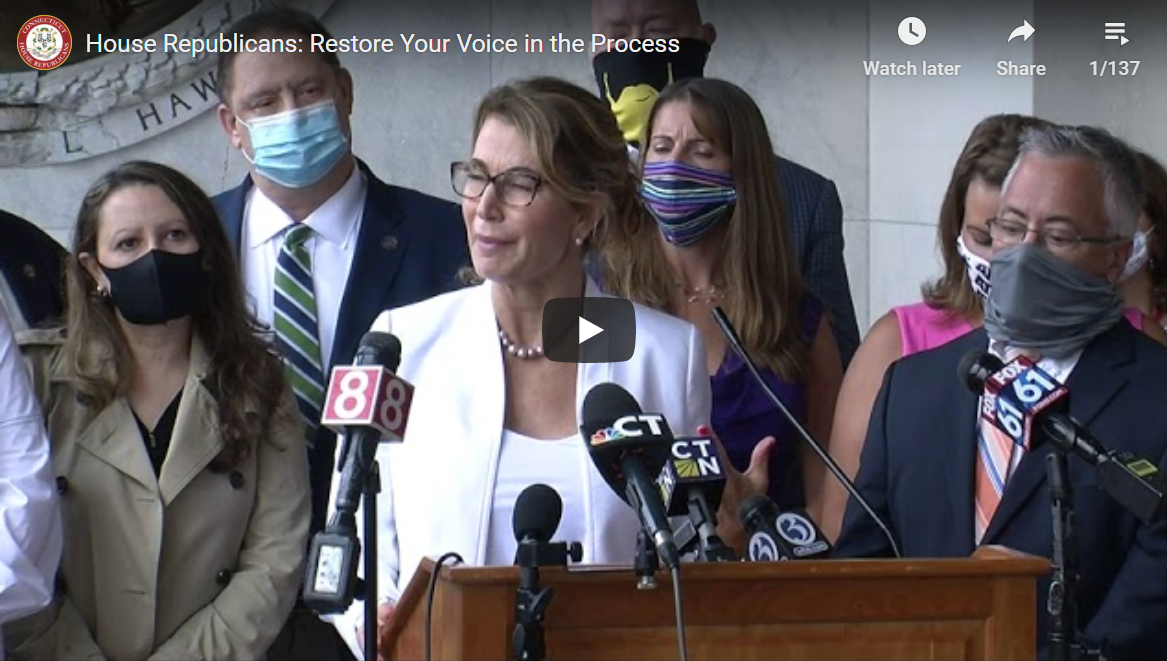 HARTOFRD – House Republicans, at a Capitol press conference today, challenged Gov. Lamont’s authority to singlehandedly determine how Connecticut emerges from the pandemic, saying a legislative committee should vote on his efforts to extend his sweeping executive orders beyond their Sept. 9 expiration date.

Republicans said the state Constitutional safeguards that guarantee separate but equal branches of government are at stake. The orders would affect virtually all aspects of public life. Republicans said the  orders should be re-evaluated on a case-by-case basis. There are more than 70 executive orders dealing with myriad issues.

“The authority that the legislature extended to the governor in March has an expiration date of Sept. 9,’’ House Republican Leader Themis Klarides said. “The legislature agreed at the outset of this crisis that it was necessary to give the governor wide latitude to manage the state of Connecticut, and we acknowledged then that the General Assembly could not meet as regularly scheduled. Any extension now, however, should be addressed by the committee consisting of legislative leaders and members of the Public Health Committee as we have all agreed to,’’ Klarides said.

Deputy House Republican Leader Vincent Candelora of North Branford said, “We need to maintain a bipartisan stance on all these public health initiatives to come up with the best solutions for Connecticut, whether it is our school re-openings, our economy or our best practices that guide us in the future.’’

Dr. William Petit, Ranking Member of the Public Health Committee, said, “Science, not politics must be our north star. This is about the lives of those who are at risk, or those who could become at risk. Let’s have a straight up or down vote by the committee that was set up to decide exactly these issues.’’

In a letter to the panel made up of legislative leaders and members of the Public Health Committee on Tuesday, House and Senate Republicans asked that a vote on the extension of executive orders be conducted before Lamont executes another sweeping order to extend them for an additional five months.

“It is not asking too much that this committee comply with the legislative intent that we all agreed on months ago,’’ Republicans said. “As an equal branch of government, our constituents expect us to represent them in Hartford, not give in to one person’s decision.’’