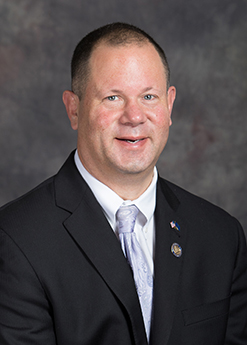 State Representative Craig Fishbein was first elected to the House of Representatives during a special election to fill a vacant seat in November 2016, and was also elected to his first full term on the same day. Craig’s political principles are grounded in seeking smaller government, lower taxes, and less interference in the day-to-day affairs of our law-abiding citizens.

Representative Fishbein was named Ranking Member of the legislature’s powerful Judiciary Committee for the 2021-2022 session by House Republican Leader Vincent Candelora. Ranking members serve as a liaison to caucus members regarding the important issues from each individual committee.

He also serves on the Government Administration and Elections (GAE) Committee and the Environment Committee for the 2021-2022 session. Previously, Representative Fishbein served on the Energy and Technology, Commerce Committee, Public Safety and Security, and the Labor Committee.

Representative Fishbein attended Wallingford schools, and graduated from Mark T. Sheehan High School in 1983 before briefly attending Southern Connecticut State University.  In 1985, Representative Fishbein left school to focus on his career and successfully worked in retail management for large, national retailers for more than a decade before enrolling at Quinnipiac College to finish his degree.

During law school, Representative Fishbein worked full-time as a clerk at the New Britain Superior Court, and upon graduation in 2001 passed the Connecticut Bar.  In July of 2002, Representative Fishbein joined his father, Norman, at Fishbein Law Firm, LLC, in Wallingford, where he continues to practice law primarily devoted to civil litigation in Connecticut’s state and federal courts.  In 2005, he became licensed to practice before the United States Supreme Court.

In addition to his service to the state, Representative Fishbein has been a member of the Wallingford Town Council since January of 2010, and he has consistently sought out differing opinions and engaged in hours of personal research on important issues before making a decision.  As such, he says there is hardly a decision he has made in the Town Council Chambers he would have handled differently. A proponent of small government, Representative Fishbein has never voted for a tax increase during his time on the Town Council.

Craig enjoys the shooting sports, hiking, fishing, vegetable gardening, and ice hockey.  A lifelong fan of the Boston Red Sox and New York Rangers, many people say that he bleeds “Ranger Blue.” Representative Fishbein and his wife Rhonda have been married for 28 years