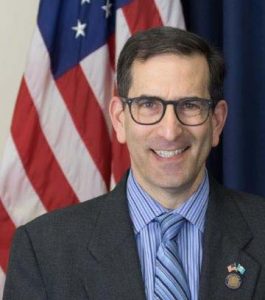 Representative Dubitsky was elected to his fourth-term in November of 2020.

During the 2021 and 2022 legislative sessions, he continues to serve on the Planning and Development, Environment, and Judiciary Committees. Rep. Dubitsky is a member of the Animal Welfare, Fire/EMS, Conservative, Rural, Sportsmen’s, and Tourism Caucus. In addition, he is also a part of the School Safety working group and Northeast and Southeast Delegation.

Rep. Dubitsky graduated with a Bachelor of Fine Arts degree in Theater Arts and Film from the State University of New York at Purchase. After college, he worked as a designer and technician on hundreds of television shows, theater productions and trade shows around the world.

After receiving a Juris Doctor degree from the University of Utah College of Law in 1999, Dubitsky practiced law with a number of major international and Connecticut law firms. As a partner at Pullman & Comley, LLC in Hartford, Doug was the Chair of the firm’s Agribusiness & Equine Practice Group, eventually leaving to start his own law firm focusing on agricultural and equine business, commercial litigation and land use. Since 2010, he has also been a guest lecturer on Agriculture and Equine Law at the University of Connecticut’s College of Agriculture, Health and Natural Recourses.

Dubitsky currently serves on the Chaplin Board of Finance and is the Chair of the Chaplin Planning & Zoning Commission. He served for two years on the Connecticut Teachers’ Retirement Board by appointment of Governor M. Jodi Rell.