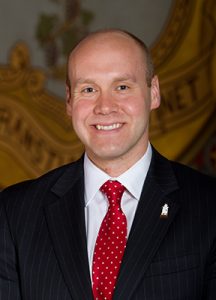 State Rep. Devin Carney proudly represents the 23rd General Assembly District, which includes the towns of Lyme, Old Lyme, Old Saybrook and Westbrook. He was elected to his forth two-year term in November 2020.

For the 2021 and 2022 legislative sessions, Rep. Carney was appointed by House Republican Leader Vincent Candelora to serve as the Ranking Member for the Transportation Committee.

Having been a member of the committee for the past six years, the familiarity of responsibilities that come with this appointment is one Rep. Carney knows well, having served in the same capacity from 2017 to 2018 under former Minority Leader Themis Klarides.

In addition, he will also return as a member of the Finance, Revenue and Bonding Committee and the Ranking Member of the Transportation Bonding Subcommittee and will begin his first term on the Education Committee. Rep. Carney was also named an Assistant House Republican Leader and chosen, again, to serve on the House Republican Screening Committee. He serves as the co-chair of the bipartisan Clean Energy Caucus and as a member of the bipartisan Tourism Caucus.

As a life-long resident of the 23rd, he knows first-hand what is important to the residents of this district. Having gone through the Old Saybrook public school system from kindergarten through high school, he knows just how vital the success of our children is as well as the quality of education they receive.

Carney graduated from Brandeis University in 2006 where he received a BA in Political Science and a BA in American Studies with a minor in Film. In addition to the legislature, Carney works in finance at John A Bysko Associates and as a Realtor with Coldwell Banker.

Rep. Carney volunteers his time with many local organizations including serving on The Katharine Hepburn Cultural Arts Center Board of Trustees, as the Treasurer of the Board of Saybrook Senior Housing, as a member of The Rotary Club of Old Saybrook, and as a member of both the Lyme-Old Lyme and Old Saybrook Chambers of Commerce. In addition, he serves as a member of the bipartisan Millennial Action Project, which brings together legislators 45 and under, and the National Caucus of Environmental Legislators. He also serves as an alternate member of the Old Lyme Zoning Board of Appeals.

The various aspects of life, business and community that Carney experienced in Connecticut have given him the means to fully relate to his constituents. The 23rd district is deeply rooted in both his past and present; he is fully vested in this community and seeks to represent these communities with distinction as their voice in Hartford.