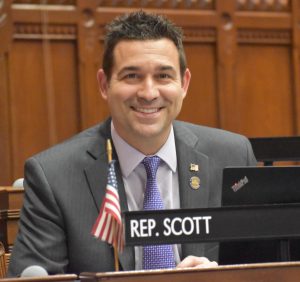 Rep. Tony Scott represents the 112th House District in the Connecticut General Assembly, serving the constituents of the Town of Monroe and a section of Newtown. As of January 2023, the 112th District will not include Newtown and will be reconfigured to include sections of Easton and Trumbull.

Rep. Scott served as a member of the Monroe Town Council, where he also was Chairman of the key Strategic Planning Subcommittee. He also served as a member of the FEHPS Subcommittee, specifically covering the Board of Finance and EMS Commission for the Council. Prior to the Town Council, he served for 8 years on the Monroe Parks & Recreation Commission, leading as Chairman for 6 years. He also previously served on the Monroe Economic Development Commission.

He graduated from Penn State University with a Communications degree in Broadcast Journalism and currently works in Marketing at Edgewell Personal Care in Shelton, CT as a Senior Promotions Manager. He previously had a similar Marketing role with Henkel Corporation in Stamford, CT.

He is married to Jennifer (Deak), who was born and raised in Monroe, where they have lived with their twin daughters since 2007.