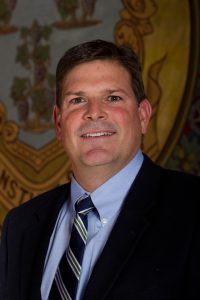 State Representative Thomas O’Dea was reelected to his fifth term in office on November 3, 2020. Tom proudly serves the 125th Connecticut House District, which includes the communities of New Canaan and Wilton.

An experienced trial attorney with over 40 jury verdicts as lead counsel, Tom concentrates his practice in civil litigation on behalf of individuals and corporations in a wide variety of matters ranging from commercial litigation to personal injury litigation. Tom has also litigated numerous legal malpractice and trucking industry cases.

From 1995 to 2004, Tom served as a member of the Police Officers Standards and Training Council (POST), which is responsible for overseeing all training and certification of municipal police officers in Connecticut. From 1997 to 2004, he served by appointment of the governor as a Victim Compensation Commissioner within the state’s judicial branch, responsible for adjudicating claims brought by victims of crimes.

Tom was a member of the New Canaan Town Council from 2005 until January, 2013 when he was elected to Connecticut’s State House of Representatives.

JD, Columbus School of Law at the Catholic University of America, 1991

Tom and his wife Kerry have three children – Tommy, Caroline, & Michael, and in his free time he coaches New Canaan Youth Football, Baseball, and Basketball.