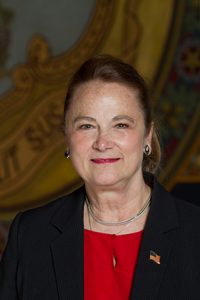 Kathleen McCarty represents the 38th General Assembly District covering Waterford and Montville, and is currently serving her fourth two-year term. State Rep. McCarty serves as Ranking Member of the Education Committee, and is a member of the Appropriations and Public Health Committee. Ranking members serve as a liaison to caucus members regarding the important issues from each individual committee.

As Ranking Member of the Education Committee, McCarty will lead members on all matters relating to the Department of Education; local and regional boards of education and the substantive law of collective bargaining covering teachers and professional employees of such boards; vocational rehabilitation; the Commission on the Arts; and libraries, museums and historical and cultural associations.

On the Appropriations Committee, McCarty and her colleagues oversee budgets of state agencies, collective bargaining, and salaries, benefits and retirement of state employees, teachers and veterans.

McCarty is also a member of professional organizations such as the Connecticut Association of Boards of Education and National School Board Association, Women in Aviation International, and Société des Professeurs Français et Francophone d’Amérique.

A small business owner, Waterford resident McCarty is a mother to two adult daughters and a grandmother to three grandchildren.