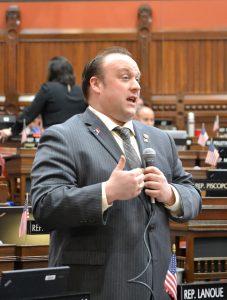 State Representative Brian Lanoue was re-elected to a second term in the General Assembly on November 2, 2020. He proudly serves the 45th District, which includes Griswold, Lisbon, Plainfield, Sterling and Voluntown. Brian is a Co-Chair of the Internship Committee, he also serves on the Committee on Children, Banks and Commerce Committees.

Born and raised in Eastern Connecticut, Brian graduated from the Norwich Free Academy, where he was a well-known host and producer at a commercial radio station, and he received his bachelor’s degree in political science from Eastern Connecticut State University. He took his education a step further by earning his master’s degree in public policy from Southern Connecticut State University where he authored a thesis on the change in public officials’ political positions when they go from one elected office to another.

He is also a former champion powerlifter – one of the youngest athletes ever having won the Men’s Open world title for the deadlift, substance free, at the age of 21.

Brian is a strong believer in Connecticut innovation and entrepreneurship. As the co-owner of a small, family-run business in Griswold, he has experienced the struggles faced by companies operating in our state and understands how legislation passed in Hartford can affect job creators.

Brian addressed each of these issues since his time in the state legislature.

Among Brian’s legislative successes in 2021 was fighting to protect children by requiring background checks for children’s camp employees. After a national news report surfaced detailing abuse at an out of state children’s camp – the absence of background checks in Connecticut prompted Rep. Lanoue to introduce the legislation which he has pushed for since his freshman year in the legislature. Under this new law, PA21-82, now requires employees who work at children’s camps to submit to comprehensive background checks which adds an extra layer of protection for children while away from home. The bill received overwhelming bi-partisan support and was passed by the legislature and signed into law by the governor. Rep. Lanoue is also the lead advocate for the CRISIS Initiative Pilot Program, which brings together state and local law enforcement with mental health professionals to combat the opioid epidemic and mental health disorders. Brian, being the lead advocate on this bill, worked diligently to expand the CRISIS Initiative into Windham County in 2021. The expansion moved CRISIS into the Troop D jurisdiction of the Connecticut State Police and now joins Troop E as the two contiguous regions the program is now being utilized. The expansion of this program is important to the region and adds another resource for police, and those directly in need of the benefits of this program. During the 2022 session, expansion throughout all of Connecticut is being considered.

The Town of Voluntown was upgraded into the Tier one PILOT reimbursement rate from the State of Connecticut following strong advocacy by Rep. Lanoue. In the original language of the legislation, Voluntown was in Tier two of the PILOT Formula, however, the bill was rewritten to specifically address the town. Rep. Lanoue also co-introduced with the Conservative Caucus during the 2021 session, a bill concept that he first introduced in 2019, to help defend gun owners and the Second Amendment by preventing municipalities from imposing more restrictive firearm regulations.

During the 2022 legislative session, Rep. Lanoue proposed a key bill for volunteer first responders, which would deduct personal income tax for stipends paid to volunteer firefighters and volunteer ambulance members. With volunteers being such a vital component to our communities, Rep. Lanoue believes this bill is vital in hopes of giving people more incentive to serve their communities.  H.B. No. 5173, An Act Allowing a Personal Income Tax Deduction for Stipends Paid to Volunteer Firefighters and Volunteer Ambulance Members, is aimed to help with recruiting and retaining volunteer Firefighters and EMS personnel. Rep. Lanoue originally introduced this proposal as a bi-partisan bill during the 2021 legislative session (H.B. 5722). The bill would exempt Connecticut taxes on stipends paid by a municipality to volunteer firefighters and ambulance personnel, up to $1,500 per year.

In March of 2022, Rep. Lanoue testified against legislation that aimed to further violate  law-abiding citizens’  Second Amendment rights that encroached on their constitutional rights to protect themselves and their families. S.B. No. 16, An Act Addressing Gun Violence and Juvenile Crime, was a piece of legislation that had other motives and little to do with curbing juvenile crime. The bill, if passed in its original form, would have required new licensing for retail gun dealers, impose additional restrictions, which included demonstrations and carrying on public transportation.

During the aftermath of Tropical Storm Isaias and the Eversource rate hikes, Brian co-introduced a bill that would establish a task force to study utility companies in Connecticut, specifically to examine the costs and benefits of bringing alternative energy sources into the market.

The 45th General Assembly District’s unique location between two metropolitan hubs offers it a unique opportunity for growth and innovation. As state representative, Brian will continue advocating for regulation reform, tax relief and transportation infrastructure improvements, to attract more businesses to the region, and will fight any anti-business legislation introduced in Hartford. He believes that education must evolve at every level in order to prepare students for the jobs of the 21st Century and will continue to work with his Teen Advisory Council to address the concerns of young people across Connecticut.