COLEBROOK—State Representative Jay Case (R-Winsted) and State Senator Kevin Witkos (R-Canton) visited the Colebrook Senior Center on Tuesday morning to provide a legislative update and to answer questions about ongoing discussions on the major the issues occurring at the State Capitol.

“I appreciate Colebrook Senior Center inviting me to speak with our community’s seniors about the current legislative session,” explained Case. “The number one concern I heard during my visit was the overall affordability of our state, or lack thereof. It’s certainly a justifiable sentiment, considering the devastating tax proposals on the table along with several other questionable financial policies.” 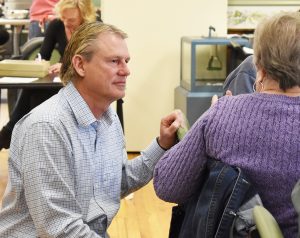 State Sen. Kevin Witkos speaks with a constituent at the Senior Center in Colebrook.

Senator Witkos said, “It is always important to hear directly from our residents about the issues they care deeply about. What’s clear from our visit is that the new and expanded taxes being supported by the majority party would only cause more of our residents and seniors on fixed incomes to relocate out of Connecticut. The legislature needs to take these concerns seriously and be mindful of how these proposals would negatively impact thousands of residents and seniors across our state.”

According to both Case and Witkos, those on a fixed income are particularly vulnerable under the proposed fiscal laws in Hartford. Taxpayers, including the state’s elderly population, are looking at a $2 billion increase over the next two fiscal years.

“We need to be help vulnerable populations, not put them at greater risk. The nearsighted proposals to tax our way out of the budget shortfalls cannot be sustained. This is clearly exemplified by the fact that, despite the majority party in Hartford imposing the two largest tax-increases in state history over the last ten years, Connecticut is still struggling economically,” said Case.

According to Case and Witkos, outside of the tax increases, other legislative proposals, like the implementation of tolls and raising the minimum wage, could paralyze a stressed and over-regulated financial environment.

Case concluded, “Prioritizing the shrinking pool of taxpayer money we have to ensure seniors have adequate resources is a critical concept to work from as we continue to craft the state budget. Asking seniors to pay more into a system that is failing the basic needs of so many does not seem fair, especially after the legislature has acted five separate times to increase management-level state employee salaries this session alone.”

The legislature will conclude its business on Wednesday, June 5th.