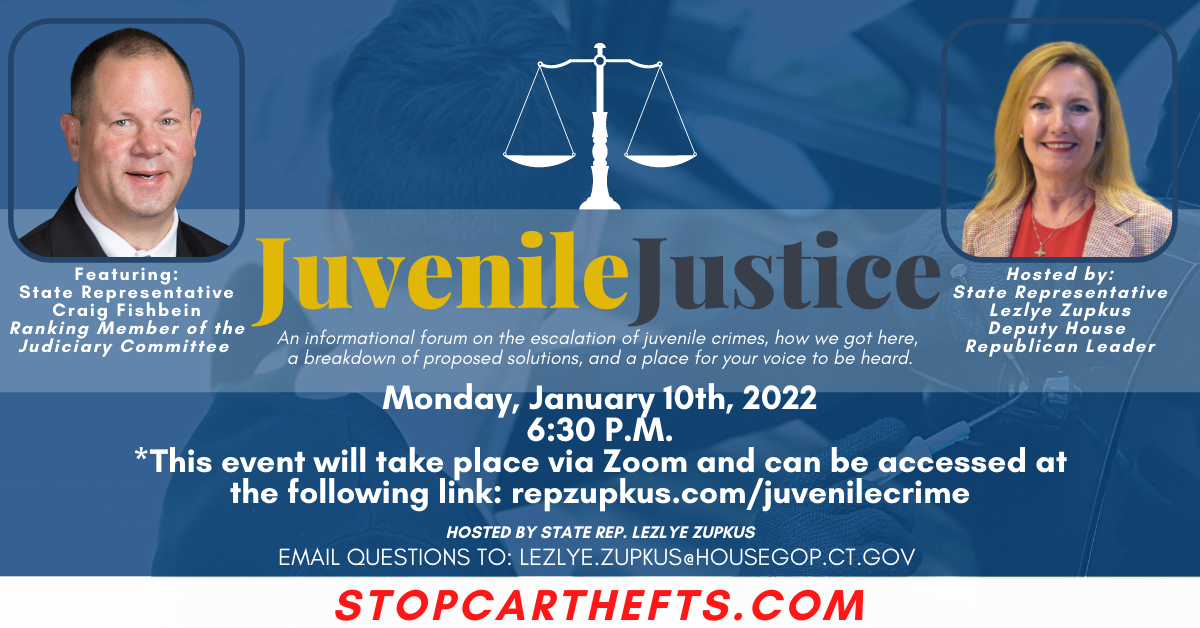 Responding to an ongoing juvenile crime wave, including rampant motor vehicle thefts, State Representatives Craig Fishbein and Lezlye Zupkus will host a Juvenile Justice Forum on Monday January 10 at 6:30 p.m. on Zoom to engage the public and work together to find solutions.

The event had been planned for in-person attendance, but it will now be on Zoom. All are invited to join us online on Monday to learn more about the House Republican’s plan to address an ongoing wave of juvenile crime that continues to impact our state on a daily basis.

From Glastonbury where a homeowner dodged gunfire when she confronted a car thief, to Waterbury, where a 12-year-old girl was held against her will when two juveniles stole a car while she was in the backseat, residents are subjected to this abhorrent behavior while the Democrat majority continues to deny the problem exists.

In 2020, Connecticut saw a 40 percent increase in car thefts, which totaled more than 8,400, the highest amount it has been since 2011. The problem has continued to get worse.

People should not have to look over their shoulders when they stop for gas or pick up groceries. They should feel secure in knowing that when they park their cars at night, their vehicles will still be there in the morning. Right now, that simply isn’t the case.

The veteran state lawmakers will discuss changes to Connecticut laws over the past ten years, the most recent data, and details of the House Republican’s plan to address the problem through legislation, and to answer local residents’ questions about this important issue.

Despite assurances from legislative Democrats that violent crime is down nationwide, the data clearly shows juvenile crime is on the rise in Connecticut, with car thefts committed by juvenile offenders increasing dramatically. House Republicans have repeatedly called upon the majority party to convene the legislature in special session to address these stunning increases, so we can at least debate the matter to find a solution. However, only a small number of members of that majority have supported those requests.

For many homeowners and property owners, these crimes are personal, with many feeling like their voices aren’t being heard. Law enforcement officers have testified that they feel like their hands are tied, and juveniles are being released as quickly as they’re apprehended. Something must be done. Silence and denial are not the answer.

WHERE: Online via Zoom at this link: https://repzupkus.com/juvenilecrime

Anyone with additional questions regarding the Juvenile Justice Forum can contact me at 1-800-842-1423 or via email at Lezlye.Zupkus@housegop.ct.gov