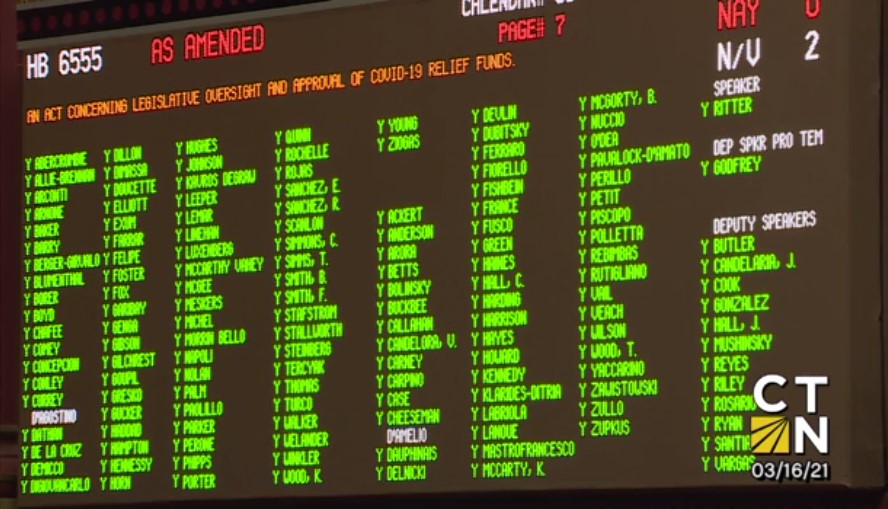 Hartford – The legislature has been in a state of limbo since it halted its business for the pandemic in the spring of 2020. State Rep. Joe Zullo (R-East Haven) voted in favor of a new bill that will require Gov. Lamont to vet his COVID-relief spending plans through the legislature. During a House Session held earlier this week, the chamber took unanimous action on HB 6555 An Act Concerning Legislative Oversight of COVID-19 Relief Funding.

“Last summer I joined fellow legislators to begin dialogue with the governor’s office on how we can better include the voice of our residents in combatting and overcoming the virus. In January of this year, I supported a request for the legislature to re-assume its position as a co-equal branch of government to the executive. Finally, the legislation we passed earlier this week will grant the representative body of government its rightful seat at the decision-making table,” explained Rep. Zullo.

Legislative Democrats were eager to join our call to action after the American Rescue Plan was passed by the Federal Government and penned into law. The State of Connecticut is due to receive $2.6 billion in relief funding, sparking a discussion of how best to distribute the funds.

“We have lived through unilateral rule for far too long. While we continue to navigate the pandemic’s obstacles, we know much more about the virus now than we did a year ago. Leading the state through reliance on executive orders was necessary at the beginning, but now it’s critical that major spending decisions are discussed among all stakeholders – equally – before far-reaching policy is created,” said Zullo.

After passage, the bill was immediately transmitted to the Senate for its action. The Senate is expected to mirror the House’s action on this legislation, before sending it to Gov. Lamont’s desk for his signature.