On Thursday, the House of Representatives debated House Bill 6107, An Act Concerning the Reorganization of the Zoning Enabling Act and the Promotion of Municipal Compliance. Since I trust our towns to manage their own planning and zoning rather than redirecting that authority to the state, I spoke and voted against this government overreach. All Republicans opposed the bill. HB 6107 centralizes zoning and land development authority and creates mandates on our local municipalities. If the goal is to help disadvantaged residents and improve economic mobility, our towns are better equipped to deal with these issues. The top-down, one-size-fits-all approach of this bill will hurt small towns the most.

Early last week, I joined dozens of people in Enfield to rally against the governor’s proposed new gas tax. When the state is projecting a budgetary surplus and an influx of federal dollars in pandemic relief, now is not the time to raise taxes. I will not support raising taxes that will disproportionately impact Connecticut families, retirees and small businesses. 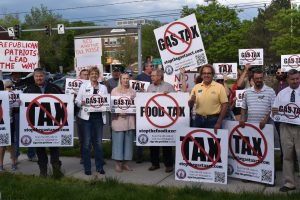 Recognizing the importance of agriculture in our communities, I cosponsored House Bill 6580, An Act Concerning Agricultural Education. This bill aims to establishing or expanding food agricultural literacy programs of study and community outreach programs by increasing interactions with rural, suburban, and urban farms.

Car thefts continue to be a problem throughout the state. Earlier this year, I both co-introduced and co-sponsored legislation with potential solutions. Some of the ideas were incorporated into a Democrat-led bill that passed the Judiciary Committee on a bipartisan basis. In a surprise move, opponents of these reforms refused to let the bill be considered in the Appropriations Committee – which killed the bill for this session. House Republican Leader sent out a public statement. 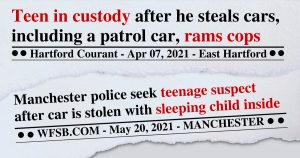 House Republican Leaders on Thursday issued the following statement in response to reports of a vehicle stolen in Manchester with a child inside:

“We started this legislative session with a clear message from Connecticut residents frustrated by the increasing threat of motor vehicle-related crimes committed by juveniles. They wanted the General Assembly to tackle this public safety crisis, yet here we are, with roughly three weeks left before the session’s end, and we’re no closer to being able to tell our constituents that state government has taken any step toward addressing this issue. Today, we awoke to learn of yet another crime where a vehicle was stolen with a child in the car—the third in a month. This frightening incident is a clear signal that majority Democrats have failed to take these crimes seriously, even letting their own bill (approved in a bipartisan Judiciary Committee vote) die on the vine. We urge our colleagues across the aisle to use what little time we have left before adjournment to address this critical situation. The public deserves swift, responsible action to address this crisis.”