I stand with our Republican Legislative leaders in rejecting the idea of yet another extension of Governor Lamont’s executive powers to April 20th. The House and the Senate are back in a regular session since January 6th, with this being said, we all are very capable of doing the jobs that we were elected to do. If we are indeed doing what is in the best interest for the people of Connecticut, it would be a good time to hold a Public Hearing to get their feedback. The members of the General Assembly should be given the opportunity to vote in favor of, or against these extensions of executive powers. There are many states facing the same challenges as Connecticut and some have already held votes to give their legislatures a much needed seat at the table during this unprecedented time.

I think the people of Connecticut deserve to have their voices heard by those who they elected to represent them in the General Assembly, I am committed to helping my constituents during one of the most difficult times any of us has faced. I will be interested to see if there is a meeting of the special committee of ten over the coming days for a vote and discussion on the impacts of executive powers being extended.

The special committee of ten legislators is made up of four Republicans and six Democrats including: 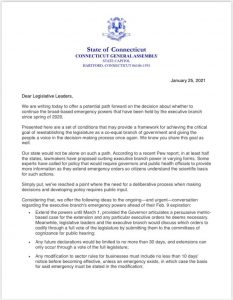 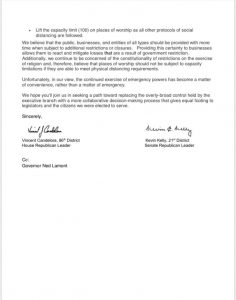