HARTFORD – State Representative JP Sredzinski (R-112) on Thursday joined his House and Senate Republican colleagues to call the public’s attention to newly released details on the 7.35% “meals tax” set to go into effect on October 1, 2019. The tax was included in the state budget passed by Democrats during the 2019 legislative session and will include nearly all prepared food items from bags of spinach weighing 8-ounces to rotisserie chicken.

According to a Department of Revenue Services (DRS) policy statement issued this week, the Democrat-approved 7.35% tax will be applied to a long list of food items that have never before been taxed.

The taxes will apply to not only prepared meals such as sandwiches, deli salads, pizza and hot buffet items, but also small packages of snacks, loose baked goods, wrapped salads, store-cut servings of fresh fruit, small servings of ice cream and “meal replacement bars.” It also applies to fountain drinks, including coffee and any beverage sold with a newly taxable “meal.”

“The Democrats have once again shown that their solution to the state’s financial woes is to impose regressive taxes on the people of Connecticut,” said Rep. Sredzinski. “Nearly everything we consume is fair game in this ‘meals tax’ scheme, and that hurts families, seniors, and some of our community’s most vulnerable populations.”

Earlier this year, Democratic lawmakers labeled the new tax as only a 1% tax increase on items already taxed at 6.35%, but the DRS statement clarifies that the new 7.35% tax will also apply to many grocery store items that have never been taxed at all.

“Governor Lamont and the Democrats in the legislature have misled the public by finding a back-door way to tax our most basic food necessities. That is simply dishonest and indefensible,” added Sredzinski. 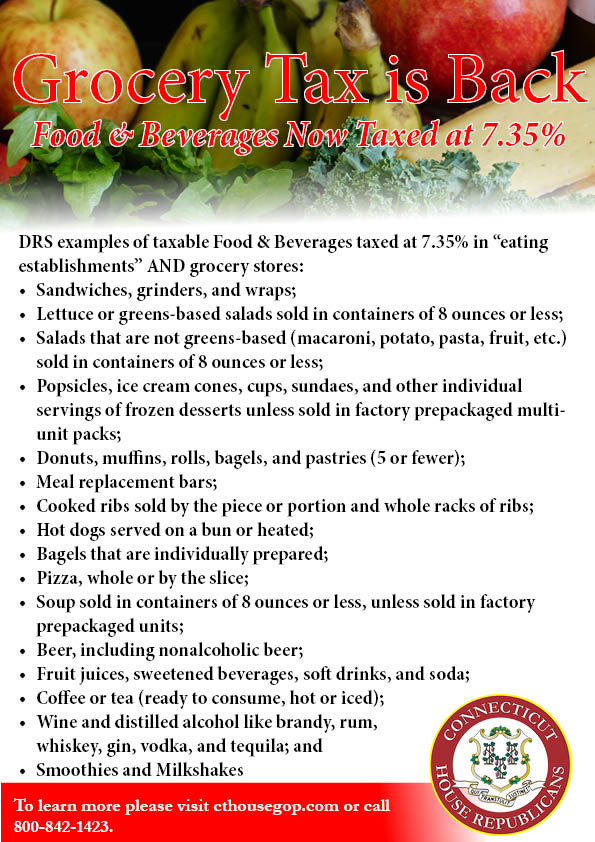