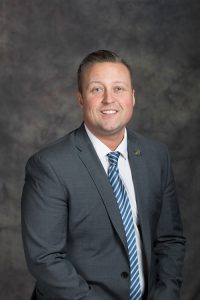 He was elected for his fourth term in November 2020 and is currently a member of the Legislature’s Public Safety, Human Services and Higher Education & Employment Advancement Committees. He also serves as a House Republican Whip, a position which reflects his leadership in the chamber and involves mobilizing votes on a range of bipartisan issues.

Sredzinski was on the Monroe Town Council since 2005, serving as Chairman from 2013 to 2014. He has also been Chairman of the Monroe Police Department Building Renovations Committee, Secretary of the Town Council Finance, Education, Health and Public Safety Committee, an appointed Member of the Connecticut Emergency Medical Services Advisory Board and a Justice of the Peace.

Previously, Sredzinski has been a Monroe Representative to the Greater Bridgeport Regional Planning Agency as well as an alternate on the Monroe Zoning Board of Appeals.

J.P. has also been a manager and an executive Board Member with Monroe Little League. He is an eighteen year Monroe resident and holds a BA and MPA from the University of Connecticut.

Sredzinski is currently the Public Safety Dispatch Supervisor for the Town of Stratford.