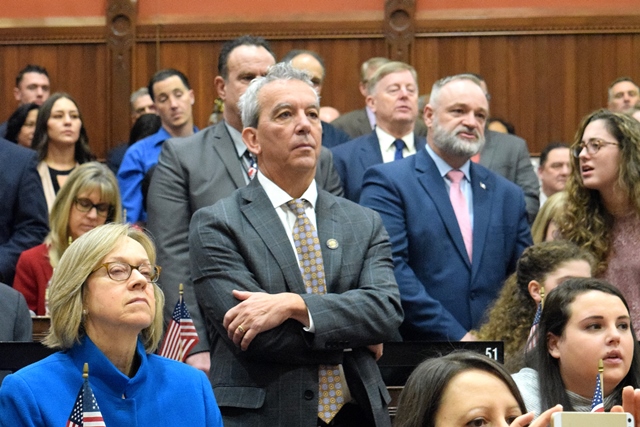 HARTFORD – State Representative Richard Smith (R-108) is standing by his House and Senate Republican colleagues and denouncing a slew of new, and increased, taxes on grocery store foods and prepared meals passed in the Democrat state budget that takes effect on October 1, 2019.

“This is entirely unsustainable,” said Rep. Smith. “How does our majority party think our residents are going to be able to keep paying more and more for everyday necessities? They are being unfairly taxed everywhere they turn.”

This week, the Connecticut Department of Revenue Services (DRS) released a statement clarifying the long list of restaurant meals and food items that the Democrat-approved 7.35% tax will be applied to, including dozens of products that have not been previously taxed.

DRS also clarified that the 7.35% tax rate will be effective in grocery stores, “which previously taxed meals in a different manner than other eating establishments.” According to DRS, examples of “Meals” that will be taxed at 7.35% in eating establishments and grocery stores includes, but is not limited to, sandwiches, grinders, and wraps; popsicles, ice cream cones; salads sold at salad bars; macaroni and potato salads; donuts, muffins, rolls, bagels, pastries and cookies; pies or cakes by the slice; chips, popcorn, kettle corn, nuts, trail mix, crackers, snack cakes, or other snack foods; pizza, whole or by the slice; cooked chicken sold by the piece, buckets of chicken and whole cooked chickens; hot dogs served on a bun or heated; all fountain drinks and beverages provided with the sale of a taxable meal; hot buffet foods; cooked to order food; any other snack foods kept warm for purchase, and more. Find a full list here.

“Substantial public outcry caused Democrats to publicly back away from their initial plans to tax grocery store foods, however, they essentially found a way to do so by implementing this additional tax,” claims Rep Smith. “Once again the consumer gets slammed for doing nothing more than purchasing a meal, so the Government can support its bloated appetite. I am also concerned about how anti-business these taxes are. The way this tax is being implemented is very confusing; for example, a package of two rolls from the bakery will be taxed, but a package of only six will not? Our grocery stores – especially the smaller ‘mom and pop’ establishments – are going to suffer under the burden of complying with these complicated new tax laws and also keeping their customers.”