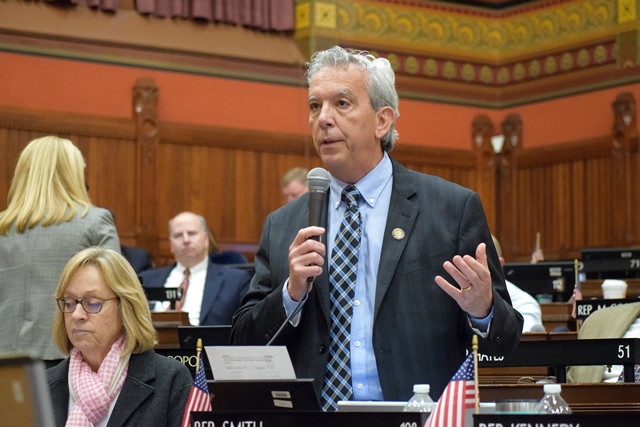 The concept of paid family and medical leave allows workers to take paid time off from their jobs to deal with personal issues such as a sick family member or the birth of a child – a concept that has bipartisan support.  However, the bill that passed forces every private sector worker to cough up one-half of one percent of their salary from every paycheck to support the program whether they intend to use it or not, with no choice to opt out. The mandatory payroll tax is expected to raise $400 million in revenue, and carries $13 million in startup costs. It would be run by a new quasi-government agency, which would hire more unionized employees to process paperwork, spend startup money on television advertisements and mailers, and dole out generous wage replacement benefits for up to 12 weeks of leave.

“When you ask folks on the street about paid family and medical leave, they tend to respond that they are in favor of it,” said Rep. Smith, who serves on the Labor Committee. “But when I tell them about the details about the bill, like the mandatory 0.5% payroll tax on every employee across the state, or the task of temporarily replacing an employee on leave for 12 weeks – and then having to pay that temporary employee unemployment benefits when they are let go, they very quickly change their outlook and ask me, ‘Why are we doing this?’

“This bill has an expansive definition of family, unfairly excludes unionized state and municipal employees from the payroll tax and grows the size of government in a time of serious fiscal crisis. Democrats have supposedly agreed on a two-year state budget that’s heavy on business and middle class tax hikes. Knowing this, the paid family and medical leave program should have been held, or allowed employees a choice to opt out to make it sustainable and fair to both the employer and employee,” said Rep. Smith.

House Republicans proposed an amendment for a private sector alternative, which required the state’s Insurance Commissioner to develop regulations that would allow insurance companies to develop a menu of family leave plans residents could voluntarily buy. The Amendment failed 84 to 61 as Democrats chose to keep the mandatory payroll tax and every employee.

“I am in favor of paid family and medical leave,” Rep. Smith said. “There is a place and need for it. What I am not in favor of is the way it was set up. I am a small business owner, and I offered my assistance on this bill to make it fairer so that the public and other small businesses could support it. But nothing came of my offer. I have fought against other bills that are damaging to the small businesses in our community, and I do so again today because, I can tell you from my own perspective, the difficulty this bill will pose by requiring every employee to pay into the program and giving them the option to utilize it without sustainable limitations, will be devastating to our small business system. No one wants to take a 12-week job, and even if they did, it is not easy to train someone new. Once again, the business owners will be picking up the slack and working extra hours to make up for the lost help.