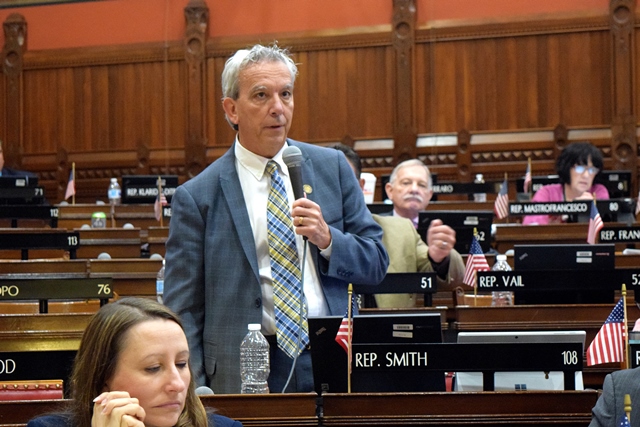 HARTFORD – State Representative Richard A. Smith (R-108) said on Thursday that the state’s business community can’t afford the crush of anti-employer policies pushed by Democrats and voted against a controversial proposal to increase the state’s minimum wage to $15 over a four and a half year period.

Cheering was displayed in the House Chamber both when House Democrats cobbled together to roll out a ramshackle bill (H.B. 5004) late Wednesday, providing neither Republicans nor the public adequate time to review a proposal that will drive state spending hikes and trigger cost increases for businesses small and large, and when it was passed this morning – a reaction deemed inappropriate according to House Rules.

“I wonder if we will hear those same cheers as businesses continue the exodus out of Connecticut? I wonder if my Democratic colleagues were cheering when the reports came in that we lose 3,400 jobs in the first quarter of the year? Should we cheer that we have only recovered 80% of the jobs lost starting with the 2008-2010 recession, making us the only state in New England to not have reached full recovery, while Massachusetts is currently experiencing a 600% job growth spurt,” asked Rep. Smith, who said that he respects the differences shared across the aisle but found this behavior to be disrespectful.

Additionally, Republicans raised concerns about wage compression—that increase will force employers to increase wages of employees who earn just above the minimum wage.

“This bill is putting a further nail in the coffin of our small businesses and impacts the entire State of Connecticut,” said Rep. Smith. “I’m not an Economist, but I know from what I have seen over the past 9 years in office that the policies passed by this Legislature and Labor Committee have not worked. We have to look at the facts: We raised the minimum wage five years ago and it didn’t spur the economy. It didn’t help create more jobs and people weren’t spending more money. In fact, according to the Small Business Index Policy of 2019, it has contributed to our poor business environment. We lost Aetna and GE to other states because the cost of doing business in Connecticut is 9.7% higher – labeled as a grade “F” by CNBC – than anywhere else in the country. I believe this bill will increase that percentage.

“Right now we’re at a three-year low in terms of housing sales,” said Rep. Smith. “Millennials (20-30 year olds, are our future, and yet Connecticut ranks 50th in the country – dead last – for having the highest number of millennials still living at home with their parents. With businesses, especially small “mom and pops” operations, leaving the state and making jobs so scarce, our young workforce cannot afford to go out and buy a house or get an apartment. People are therefore constantly leaving the state. When I run into folks in town, I continuously hear that they’re on their way out of Connecticut to escape our poor legislative policies. We as a group are not doing what we should to help Connecticut. Our citizens have been patiently waiting for us to enact policies that will turn the tide for them. “We failed again today.”

The proposal passed largely along party lines at roughly 12:00 p.m. Thursday after a 14 hour debate that started 10:00 p.m. Wednesday and continued all night to the following day that saw Republicans launch vigorous opposition that highlighted a variety of concerns and proposed amendments to exempt the bill’s impact on municipalities, seasonal workers and individuals with developmental disabilities. The bill will further limit the ability of our youth to find after school employment as businesses tighten their belts to absorb the increased costs.

The bill now awaits action in the State Senate.