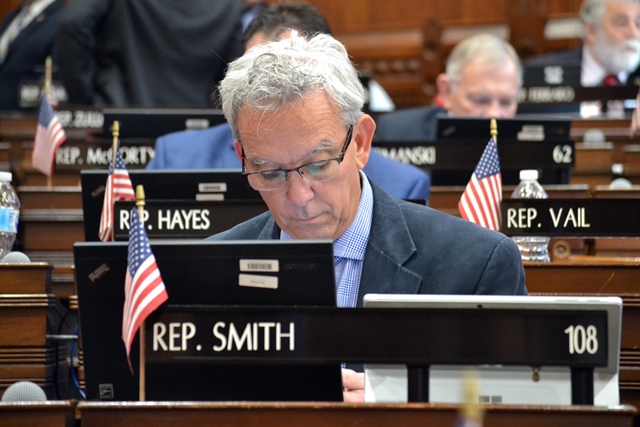 Paid Family Medical Leave (FML) is a program that allows employees to take paid time off in order to heal from an illness or care for loved ones and close family friends. Current proposals to implement this type of program in Connecticut call for it to be funded by a 0.5 percent payroll tax, which based on the answers from a recent online survey, the majority of my constituents say they cannot afford.

Of course, if the 0.5 payroll tax is not enough to fund the program, the Commissioner of Labor can increase the amount deducted from your paycheck. Under the current proposal, if more than two percent of the labor force uses the program, it will become insolvent, thereby requiring the tax to be raised.

All private-sector employees in Connecticut would have to contribute to this state-run trust fund from which qualified employees on leave would draw their salary for up to 12 weeks. Concerns regarding the sustainability, cost of administration, and potential fraud and abuse of the program have majority leaders at odds even with their own caucus as to how to make paid FML happen.

Governor Lamont’s FML proposal allows employees on leave to earn 90 percent of their typical earnings; up to $600 per week for anyone making around $15 an hour and 67% up to $900 for workers earning more than that. A different FML proposal that passed out of the Finance Committee, on the other hand, would permit employees on leave to receive 100 percent of their income, up to $1,000, which would be one of the highest income replacement levels in the country. It also includes up to $20 million in bonds for the program to fund the $10 million for start-up costs in 2019 and $10 million for start-up costs in 2020.

Making this program a payroll tax-funded mandate will burden employees who may never use paid FML, and forces Connecticut’s businesses with at least one employee to shoulder ever-more government regulation and expense. Small business would also need to hire replacements for anyone going on leave no matter how burdensome or devastating it can be for the business.  These replacements would only serve for the 12 weeks the employee is on leave, then be subsequently be laid off and trigger unemployment charges.

In a recent poll, 68% of my constituents said that they would not be in favor of an employee payroll tax that is automatically deducted from their paycheck to fund a state-run paid family leave program. 11% said they might, depending on the amount, but needed more details. More information can be found by searching for Senate Bill 881 (Governor Lamont’s proposal) or House Bill 5003 (the Legislature’s Bill) on the General Assembly’s website at www.cga.ct.gov.

Concerns I heard from this poll include that these proposals could lead to abuse of subsidized “vacations,” more fiscal government mismanagement, an unreliable/irresponsible workforce, future economic collapse, increased unwanted governmental control, and ultimately more people and businesses leaving Connecticut.

Clearly there are alternative solutions that employees and employers can look to, such as long/short term leave insurances purchased through the private sector as opposed to another State run agency. At the state level, the best thing we can do now is cut spending and use existing revenue to support Connecticut’s employees, not implement new taxes on our already overtaxed, hard-working citizens.