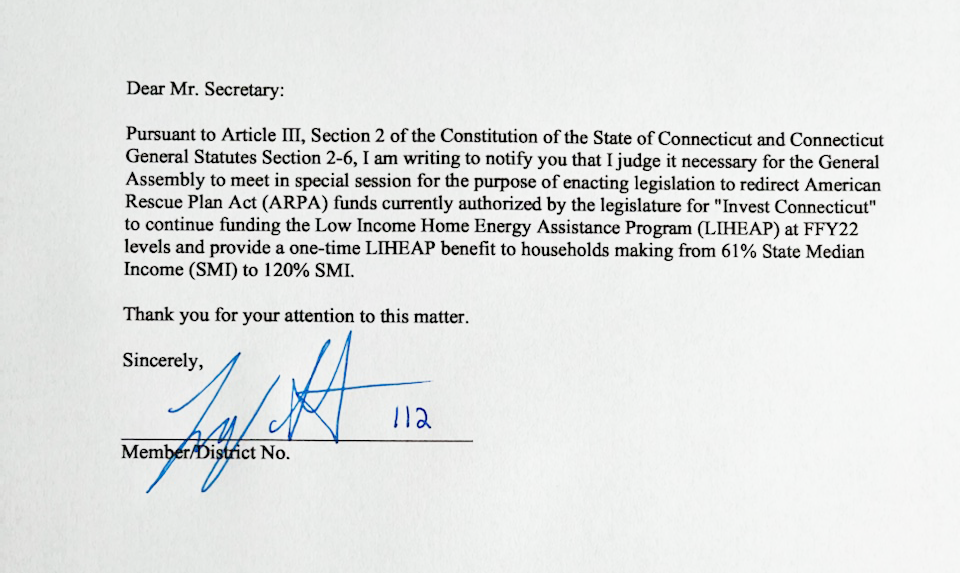 Representative Tony Scott, R-Monroe, joined his Republican colleagues in signing a petition Thursday that called for a special legislative session to address funding of a key program that helps low-income and working-class residents with home heating needs.

The Appropriations, Human Services and Energy and Technology committees held a joint public hearing earlier this week in which the majority Democrat members decided to advance an allocation plan by Governor Lamont, which would result in a decrease in funding for the Low Income Home Energy Assistance Program (LIHEAP).

The spending plan, which was ultimately approved by the majority on the committees, reduces funding to pre-pandemic levels, while demand is increasing. Historic inflation continues to eat into our budgets and this winter is sure to be difficult on some of our friends and neighbors who cannot afford home heating oil that has hit an average of $4.57 a gallon.

An amendment that Republicans attempted to introduce would have increased funding for energy assistance to prevent a devastating decrease in benefits for CT’s most vulnerable. The Republican proposal, which was rejected by the committees, would have supplemented the $79.2 million in expected federal LIHEAP funds to increase total home energy assistance to $191.5 million.

Governor Lamont has touted the state’s record surpluses that are in the billions. We could have used just a portion of already budgeted funds to replenish this program. The need and solution is obvious and urgent. This is why Republicans are calling for an immediate special session.

Governor Lamont’s allocation plan anticipates $79 million in federal funds, a decrease of more than $50 million from last year; representing a 40% cut. This amount is also lower than pre-pandemic LIHEAP levels.

Under the Governor’s plan, benefit levels would be slashed. The poorest families would see their home heating oil assistance reduced to $1,890, down from $4,825 last year and $2,980 pre pandemic.

Middle-income families are increasingly among those struggling to pay the bills with home energy prices rising at the fastest rate in over a decade.

The Republican amendment provided an immediate solution to help families.

Expand assistance to more residents by providing a flat $330 benefit to households making between 61%-120% of state median income. This reaches a family of four earning $150,000 or less.

Expand assistance with a $180 benefit for renters making between 61%-120% of state median income.

Address deliverability concerns and ensure an adequate number of vendors are able to participate in LIHEAP to meet the needs of CT families.