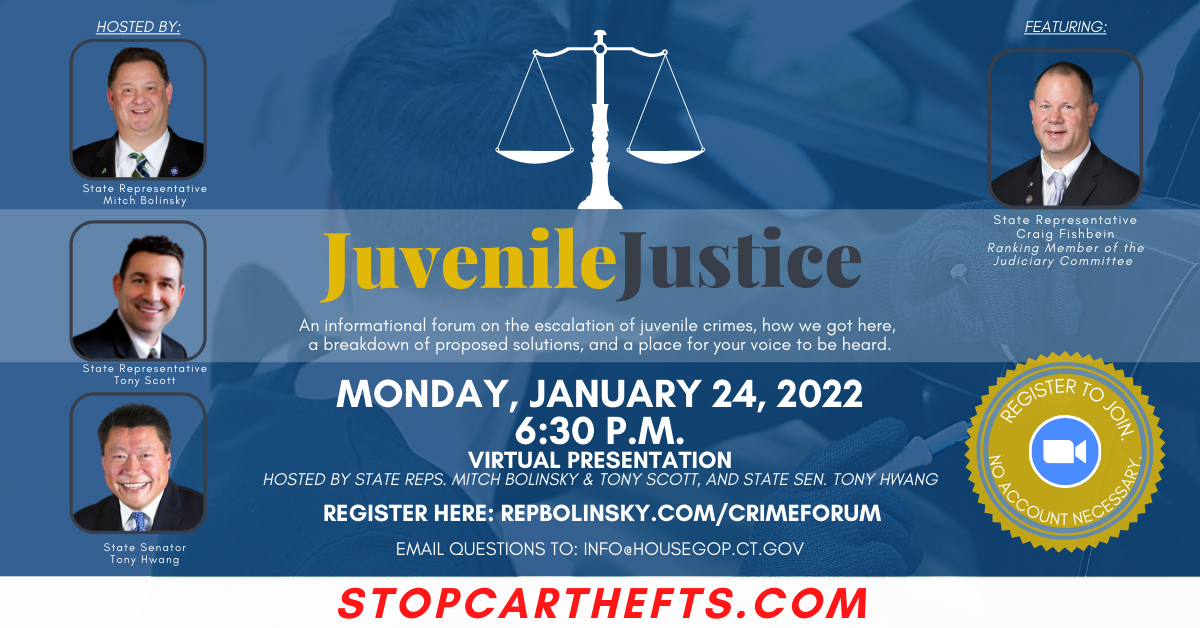 NEWTOWN – Responding to the concerns of residents statewide who are alarmed by the rise in juvenile crime, including a rampant increase in incidents involving the theft of motor vehicles, State Representatives Mitch Bolinsky (R-106), Tony Scott (R-112) and State Senator Tony Hwang (R-28) along with attorney and Ranking Member of the Judiciary Committee State Representative Craig Fishbein (R-90) will be hosting a Juvenile Justice Forum on Monday January 24th at 6:30 p.m. on Zoom to engage the public and work together to find solutions.

All residents are invited to join the lawmakers online to learn more about the House Republican’s plan to address an ongoing increase in juvenile crime that continues to impact communities, large and small, in our state on a daily basis.

WHERE: Online via Zoom register to join at: www.RepBolinsky.com/CrimeForum

During the summer and fall of 2021, Newtown saw a rash of car break-ins and according to Newtown Police Administrative Sgt. Jeff Silver, the crimes were mostly committed by juveniles and ‘are difficult to investigate’.

According to local news reports, thieves in Monroe have stolen catalytic convertors from delivery vans, burglarized local businesses and have even stolen presents from a car on Christmas Eve.

In 2020, Connecticut saw a 40 percent increase in car thefts, which totaled more than 8,400, the highest rate since 2011. The problem has continued to worsen.

Your Newtown lawmakers and Rep. Fishbein will discuss changes to Connecticut laws over the past ten years, the most recent data and details of the proposed House Republican’s plan to address this problem through legislation and answer local residents’ questions about this important issue.