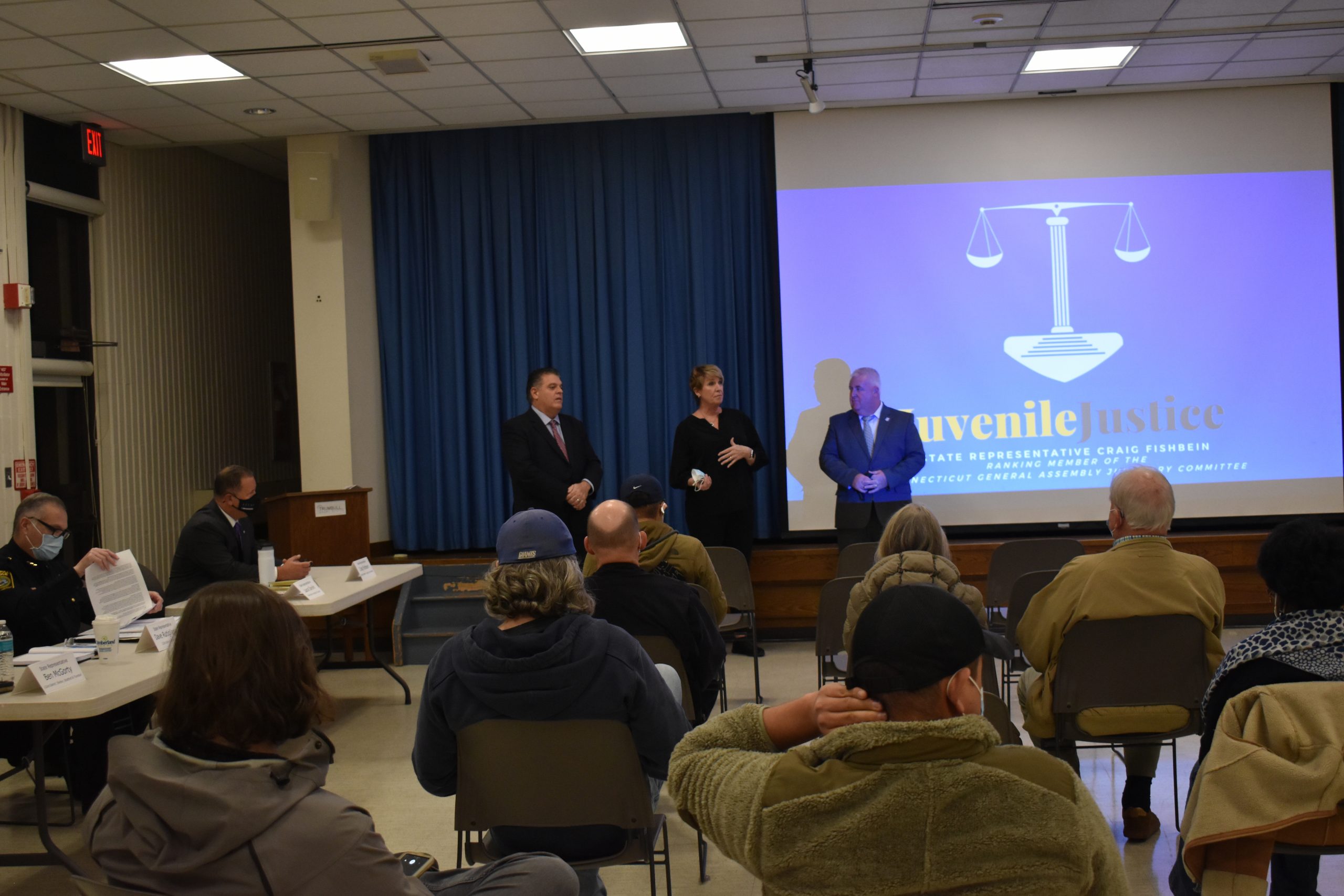 A Juvenile Justice Forum was held at the Trumbull Library on Monday evening. The event was co-hosted by several area legislators including State Reps. David Rutigliano (R-123), Laura Devlin (R-134), Ben McGorty (R-122) and Craig Fishbein (R-Wallingford). The Ranking Member of the legislature’s Judiciary Committee, Rep. Craig Fishbein, delivered a presentation that detailed years of legislative reform that has resulted in an ineffective juvenile justice system.

These reforms include raising the age of when an individual can be charged, what penalties can and cannot be assessed, and how long certain individuals can be held in custody. The presentation also focused on what proposals Republicans plan to bring forward to address the rash of car thefts in our community. These reforms included stricter monitoring, greater ability for law enforcement to hold juveniles after a felony arrest, and to ensure the courts have the resources needed to make informed decisions about each case.

Rep. Rutigliano said, “Trumbull residents are up-in-arms and I continue to receive calls asking what can be done. Our plan is a series of proposals which hope to start the conversation and are focused on prevention and opportunity, crime response, as well as police and community support. That includes law enforcement recruitment, modifications to laws to help police officers to do their jobs and building better relationships between young people and their community officers. I want to thank everyone for participating in our forum and remind people that the public dialogue will continue.”

Devlin said, “As we heard from Chief Lombardo, car thefts are up significantly the past 2 years and the increase started pre-Covid. We need to understand that the cars stolen from communities, like Fairfield or Trumbull, are then sometimes used for more violent, sometimes deadly gun crimes in our cities. It’s not just a property crime. The message from some, is that the crime issues in Connecticut are no worse than what’s happening across the country. As if this answer should satisfy and comfort the public, a public that wants action and real concrete solutions.”

“We have already begun to make some progress on this front, largely thanks to constituent input and sustained community outreach such as this. Reducing delays and improving transparency in juvenile court proceedings are common-sense, bipartisan reforms that have already won some support from the Governor and our colleagues across the aisle. Those of us in the Republican caucus are re-doubling our commitment to build on these reforms in the 2022 session, and I thank those who attended this meeting, as well as all members of the Trumbull community for sharing their thoughts and concerns,” Rep. McGorty said.

“These forums have been an important way to inform the public of the strengths and weaknesses of our current state laws, the actual results of various reforms to our Juvenile Justice system, and the changes House Republicans have proposed that will provide law enforcement with the proper tools to stop these crimes,” Rep. Fishbein said. “I want to thank the concerned citizens who came out to learn more and my colleagues for bringing the community together for this important discussion.”

To date, due to pressure from the House Republican caucus, the governor and the state judicial department have adopted a few of the reforms Republicans have advocated for since July.
Just this week, Gov. Ned Lamont said the Connecticut court system will aim to get juvenile offenders in front of a judge within one day of being arrested. That effort will focus on teens facing weapons or vehicle theft charges, according to a spokesperson for the state’s Judicial Branch.

Earlier this year the Judicial Branch adopted another Republican proposal to allow police officers access to a juvenile’s full arrest record. That change was the result of increased pressure from Republican legislators and public outcry following weeks of negative media reports featuring juvenile car thefts and the death of an innocent New Britain man struck by a juvenile car thief.

To take action on this issue, or to learn more about it, you can visit: www.stopcarthefts.com.