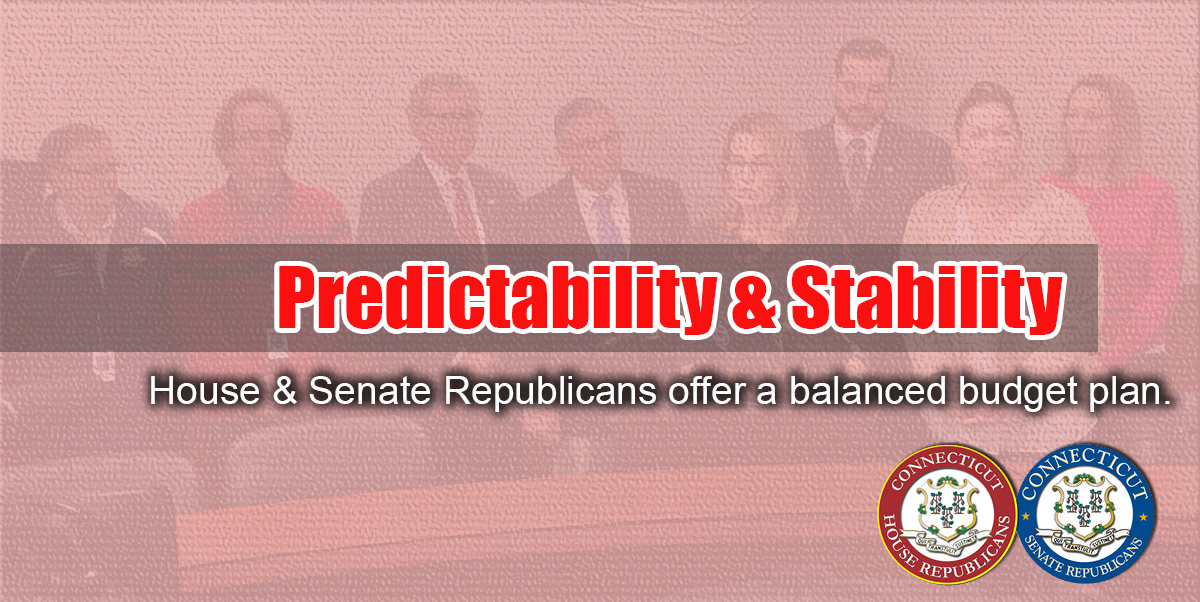 HARTFORD – Republican lawmakers today announced that the Appropriations Committee will hold a vote on a state budget proposal offered by Republican legislators.

The Republican proposal fully balances the fiscal year 2019 budget and eliminates the projected $321.5 million deficit. It includes policies to address the state’s long term unfunded liabilities and put the state on a path toward stability and predictability. Instead of spending one-time revenue or relying on massive tax increases, it upholds the principles of the volatility cap agreed to in the bipartisan budget to stop the practice of relying on unpredictable revenue and making promises the state cannot afford. It fully funds the Special Transportation Fund, restores funding for the Medicare Savings Program, and eliminates many of the governor’s proposals to increase taxes and drastically reduce education funding and municipal aid.

“This proposal is a comprehensive starting point that focuses on creating a predictable and stable budget and I look forward to giving the Appropriations Committee an opportunity to vote on it today,” said State Senator Paul Formica (R-East Lyme), Co-Chair of the Appropriations Committee. “Our committee has an obligation to pass a balanced budget that upholds our commitments. We believe this proposal is something that meets many of the goals expressed by lawmakers on both sides of the aisle. I am hopeful that it can garner bipartisan support.”

“Instead of moving backward from what we accomplished last year, this plan upholds the principles agreed to in the bipartisan budget and preserves our commitment to not use volatile revenue to make new promises the state cannot afford,” said State Representative Melissa Ziobron (R-East Haddam), Ranking Member of the Appropriations Committee. “This budget protects core services without trying to create new programs the state cannot sustain in the long term. It spells out savings lawmakers on both sides of the aisle agreed to in our bipartisan budget, which Governor Malloy has chosen to ignore. It restores funding for thousands of those on the Medicare Savings Program and fully funds the state’s Special Transportation Fund so that transportation projects can move forward immediately. It includes policies to address the state’s unfunded liabilities, stabilize retirement funds for teachers and state employees, and make our state employee benefits system more affordable over the long term.”

“While other budget proposals offered would break the state’s current promises and cut from core services in favor of starting new programs, this budget is about creating stability. It is about being realistic about what revenue we can count on year after year, paying down on state debt, and preserving core programs. This budget identifies savings that will carry forward for many years to come,” said Senate Republican President Pro Tempore Len Fasano (R-North Haven). “Earlier this month, legislative leaders agreed to effectively extend the Appropriations deadline by two weeks, and therefore allow us the time to complete and hold a vote on a full budget proposal in committee. Our Appropriations chairs and ranking members tried to reach a singular bipartisan solution within that timeframe, but ultimately found themselves nearly $600 million apart from each other with Democrats wanting to raise taxes significantly. We still feel very strongly that the Appropriations Committee has an obligation to vote on any complete budget proposal that is available today as all lawmakers agreed was our goal when we approved the placeholder bills two weeks ago. Therefore, today the Appropriations Committee will hold a vote on the budget Republicans crafted, which we believe is something lawmakers from both sides of the aisle can rally behind.”

“We welcome any and all budget ideas and hope that today’s vote in Appropriations will be bipartisan and will move our state closer to adopting an updated fiscal year 2019 budget that is balanced, that protects funding for core services, that creates stability and predictability for our state, and that avoids the devastating cuts and tax increases proposed by the governor,” said House Republican Leader Themis Klarides (R-Derby).
Republican Budget Highlights
Overview:
• Balances the Fiscal Year 2019 Budget in full.
• Balances the Special Transportation Fund, resulting in surpluses in each of the next 5 years. Implements Prioritize Progress, a long term transportation funding plan. Transit projects can move forward immediately.
• Restores funding for core government services, municipalities and education.
• Rejects governor’s drastic tax increases.
• Maintains tax breaks for seniors, retirees and working families. Maintains new retiree tax breaks contained in bipartisan budget for pension & social security income. Rejects governor’s proposal to eliminate $200 property tax credit which supports elderly and working families.
• Reduces the unfunded liabilities of the state including in the State Employees’ Retirement Fund, the Teacher’s Retirement Fund, and Retired Teacher’s Health Fund. Dedicates a minimum of $400 million to $600 million or higher to these unfunded liabilities.
• Shifts services to nonprofit providers without violating SEBAC as recommended by state agencies.