Rep. Rebimbas to be honored as a Legislator of the Year by the Connecticut Police Chiefs Association 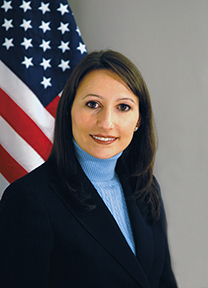 State Representative Rosa Rebimbas, R-Naugatuck, will be honored on December 16 as a recipient of the Carroll J. Hughes Legislator of the Year Award by the Connecticut Police Chiefs Association.

Rep. Rebimbas, who serves as Deputy House Leader, and other honorees will receive the award at the DoubleTree Hotel in Bristol during the association’s Winter Meeting.

She has served as a representative since 2009 and is a former ranking member of the Judiciary Committee, which is key to crafting legislation to improve public safety. The association is honoring Rep. Rebimbas for her service as an advocate for law enforcement.

Rep. Rebimbas also proposed legislation aimed at elevating the penalty for distributing intimate images by electronic means, restoring the due process rights of police officers impacted by the police accountability legislation and to ease restrictions for victims of domestic violence when applying for state benefits.

Rep. Rebimbas was very helpful to the association during negotiations on police accountability legislation that would have been harmful to law enforcement and introduced an amendment to remove the qualified immunity portion of the bill.

As a House Republican Deputy leader, she continues to work with the association on legislative proposals that affect public safety and has always been a strong advocate for law enforcement inside the caucus.

The award is named after Carroll J. Hughes, a respected and pioneering lobbyist who died in November. Hughes lobbied on behalf of many groups, including the Connecticut Police Chiefs Association.