Bill Passes Along Near Party-Line Vote, Fate Rests with the Senate 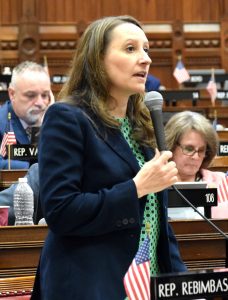 HARTFORD – State Representative Rosa C. Rebimbas (R-Naugatuck), Ranking Member of the Judiciary Committee, voted against H.B. 5004, An Act Increasing the Fair Minimum Wage. The bill was called on the House floor at approximately 10:00 p.m. on May 8th and was debated for just over 14 hours before going to a vote shortly after 12:00 p.m. the following day. The bill passed 85 to 59 without a single Republican vote.

“Today, the House passed one of the most anti-business proposals to come before the Connecticut General Assembly,” Rep. Rebimbas said. “The proponents of the bill said this legislation was about fairness. You want to discuss fairness? How is it fair to the family-run businesses in our communities that will be forced to reduce their staffs’ hours, lay-off valued employees, scale back services, raise their prices or even close their doors for good just because of this bill? How is it fair to the workers who will need to fight even harder for the few remaining jobs in their towns because employers have determined they cannot afford to hire? How is it fair to the college students who need to work year-round just to pay their tuition and avoid taking on tens of thousands of dollars in loans? How is it fair to the disabled individuals who need these positions? It’s not. This bill may have been well-intended, but it certainly will not feel that way to the thousands of people across Connecticut who will face unemployment. This will cripple many of our nonprofits that provide valuable services to our most vulnerable residents including the disabled, seniors, children, and low income families.”

H.B. 5004 increases Connecticut’s minimum wage from $10.10 per hour to $15 per hour (a 48.5 percent increase) over a four year period beginning October 1, 2019 ($11/hour). The rate would then increase $1 per year until June 1, 2023 when it becomes $15. From then onward, the minimum wage would rise automatically with the employment cost index. Only individuals under 18 years of age will be eligible to receive 85 percent of the minimum wage for the first 200 hours of employment.

Rep. Rebimbas added, “Everyone in the legislature wants to see wages increase. We want people to earn more, we want them to spend more, and we want them to have a higher standard of living. That’s the American dream, and if we allow the free market to operate with minimal intervention, things will improve. The problem is that this legislative body cannot get out of its own way and continues to pass legislation and budgets that are damaging to our already fragile state economy. If our state slides into another recession, will our Democratic colleagues still call this bill progressive? I doubt it.”

House Republicans made several attempts to amend the bill. Amendments included language to protect municipalities (LCO 8201), and non-profits, hospitals and universities (LCO 8204). Other amendments addressed seasonal employees (LBO 8259), learners and beginners (LCO 8280), as well as farm and agricultural workers (LCO 8266). None of the Republicans amendments passed.