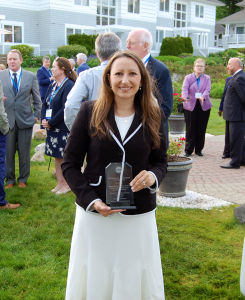 WESTBROOK – State Representative Rosa Rebimbas, R-Naugatuck, was honored by the Connecticut Trial Lawyers Association with its RisCassi-Koskoff Civil Justice Award during a ceremony this month in Westbrook.

The prestigious award is bestowed upon a person who has advocated on behalf of injured consumers and “demonstrates a compassion and commitment to advocacy on behalf of the injured and, in full support for the civil justice system.”

Rep. Rebimbas, who attended the ceremony on June 6, was admitted to the bar in 2002, opened her own law firm in 2007 and has been representing clients statewide. She has served as a state representative since 2009. She is a current member of the Judiciary Committee and former ranking member of that committee and the General Law Committee as well. She also serves as Deputy House Minority Leader.

“The RisCassi-Koskoff Civil Justice Award is an award that I will truly cherish. It is special to me because it is an award that connects my two professional lives, my service as a State Representative for 13 years and as an attorney for 19 years,” Representative Rebimbas said. “In both of these roles, I have attempted and will always strive to be compassionate and committed to advocate on behalf of those who are injured and need our civil justice system to help them. The injuries suffered are not always seen and the voices of the injured, or victims, are not always heard.  This is why advocates are needed and a fair and impartial justice system is essential. A fair and impartial justice system comes from good legislation and judges who apply the law.”

Representative Rebimbas dedicated her award “to all the attorneys and judges who are honest, fair and impartial, and dedicate their lives to upholding the rule of law without any recognition.”

Her extensive work as an attorney has included the representation of many clients who are party to civil litigation, including property transfers, advocacy on behalf of victims and representation of the underserved.

Her volunteer work has included serving as past President of Habitat for Humanity of Greater Waterbury, Inc. and on the Board of Directors of Guardian Ad Litem Services. She is also a Board Member for the Naugatuck Economic Development Committee and past Board Member of the United Way of Naugatuck and Beacon Falls.

The award was named in honor of CTLA’s founders, Leon RisCassi and Ted Koskoff. Past recipients include a congresswoman, senators, state representatives and attorneys. Attorney Kathleen Nastri was the last honoree in 2019.