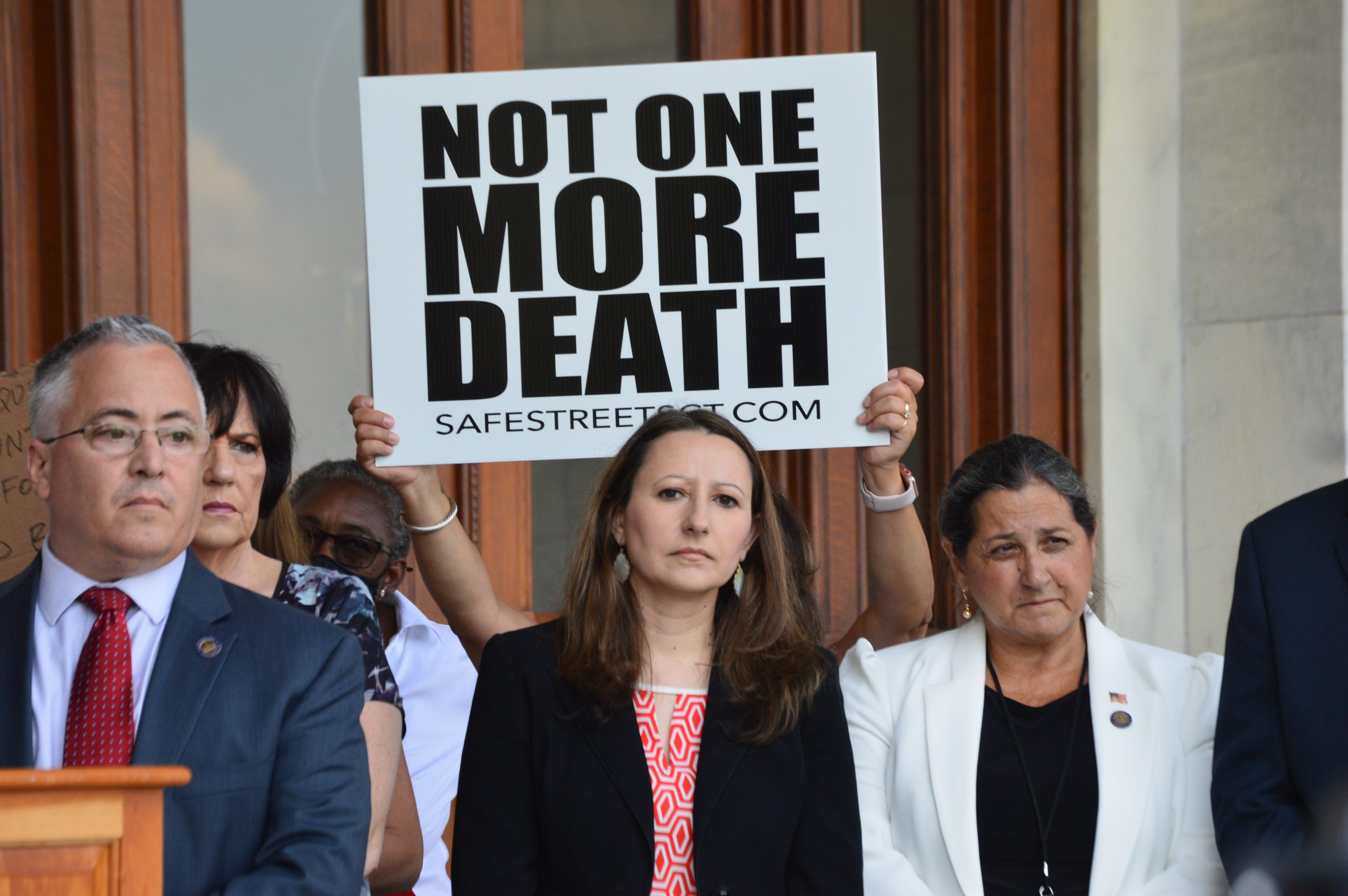 HARTFORD—Deputy House Republican Leader Rosa Rebimbas (R-Naugatuck) joined fellow caucus members on Wednesday to kickstart the call for immediate legislative action on the juvenile crime crisis that has gripped communities throughout the state, officially launching a petition effort to bring all state lawmakers into session to implement reforms. The lawmakers were joined by local police chiefs, municipal leaders, and citizen activists who are concerned about the recent spike in repeat juvenile car thefts where one incident resulted in the death of a pedestrian who was hit by a stolen vehicle.

“We have already waited too long, and now a life has been lost,” add Rep. Rebimbas. “We are not looking to ruin anyone’s future by reforming our juvenile justice system, but at this moment the system is broken and it has failed an innocent resident in New Britain. His family deserves justice. Intervention and diversionary programs are without doubt a key component in a much more holistic solution that we have yet to reach. We need to do better at the state and local level to teach our children that actions do have consequences. Unfortunately, the consequences we have in place at this moment have not deterred repeat juvenile offenders, and now this problem has become a public safety crisis. Our colleagues need to stop ignoring this crisis and join us in a special session to act – immediately.”

“This crisis has gone too long without meaningful intervention from the legislature, generating not just more citizen concern but dire outcomes for defenseless victims,” said House Republican Leader Vincent Candelora, who is joined by Deputy Leaders Jason Perillo, Rosa Rebimbas, Laura Devlin, Lezlye Zupkus, and Tom O’Dea in calling for action. “The crimes that occurred over the last seven days, combined with the seriousness of many more instances over the past months should be enough to compel every member of the General Assembly to act.”

House Republican leaders were among the more than 40 members of the House Republican caucus who attended a news conference at the capitol, where they were joined by chief elected officials and top law enforcement officials from New Britain and Wolcott—the sites of crimes last week that intensified the spotlight on the state’s juvenile justice system. The crime in New Britain, where a 53-year-old pedestrian was killed when he was struck by a stolen vehicle, raised alarm statewide when it was revealed that a 17-year-old charged in connection with the crime had been arrested 13 times in less than four years.

Addressing motor vehicle thefts by juveniles was a top priority for House Republicans heading into the legislative session in January. Ultimately, majority party lawmakers would not act on Republican proposals to hold juveniles—repeat offenders, in particular—accountable for the serious criminal acts they commit.

“We hope our colleagues join us in this process to take action on this issue that cuts across political lines,” the Republican leaders said. “Whether it’s Wolcott or New Britain, or shots fired in Glastonbury or Simsbury, these crimes are happening in communities throughout Connecticut. Residents and victims deserve to see the people they send to Hartford to represent them working on this public safety crisis. While we’ll continue to hold informal conversations with our colleagues on this topic, launching an official effort is wholly appropriate.”