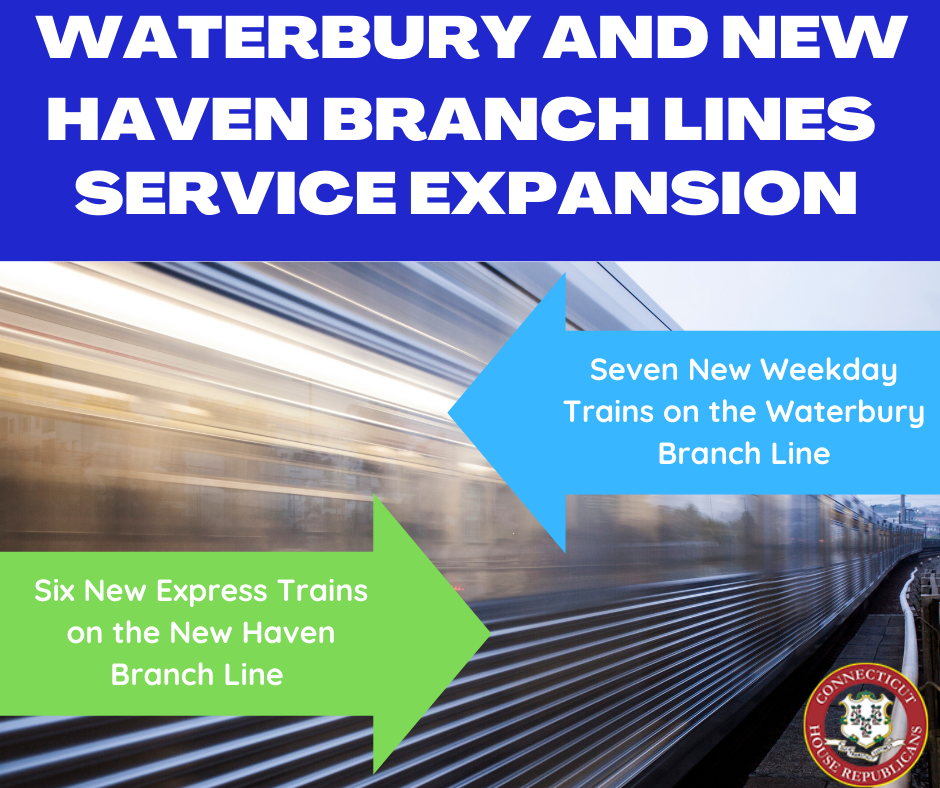 The expanded service, which began Monday, is expected to add convenience and efficiency for commuters in Waterbury and the Naugatuck Valley who are traveling to New York City, as well as other destinations. Adding trains to the Waterbury Branch Line has been a longtime goal of the bi-partisan caucus, which continues to advocate on behalf of the many constituents who rely on the rails for their daily commutes.

“As a caucus, we have been strong supporters of adding service for all residents along the Waterbury Branch Line and the additional trains are the result of work on both sides of the aisle that began in 2018, and continues today,” said Rep. Rebimbas, who serves as co-chair of the caucus. “We hope that this expansion provides not only more options for commuters, but also an economic boost to the area.”

“This considerable expansion of train service on the Waterbury Branch Line will unlock new economic opportunities across the Naugatuck Valley and support the hard-working residents who rely on the rail line. The increase in the number of weekday trains and off-peak hour service will better connect riders to their jobs, classes, and homes,” said Sen. Hartley. “As vice-chair of the appropriations committee, it is a celebratory occasion to see the state funding that I’ve worked with my colleagues to secure for these upgrades in action. It is a significant benchmark reached to bring more reliable, faster train service for customers. We need to continue building on this momentum and I will keep working with my regional colleagues to secure further investment in the rail line.”

“This expansion of service for the Waterbury Branch line is a positive trend for economic development and people residing in the Naugatuck Valley,” said Rep. Reyes. “The increase in the number of weekday trains gives commuters more choices, and as co-chair of the bipartisan Waterbury Rail Line Caucus, I am proud of the tireless advocacy that pushed for the added service, in addition to infrastructure and safety enhancements.”

Substantial infrastructure and safety improvements on the Waterbury Branch Line now allow for seven new weekday trains to be added to the schedule, increasing the number of weekday trains from 15 to 22, according to the Connecticut Department of Transportation. There will be four new southbound trains and three new northbound trains running weekdays. With these added trains, service begins earlier in the morning in both directions and operates more frequently in off-peak hours, providing more options to riders in the Naugatuck Valley, according to the DOT.

More Information about rail services in Connecticut and schedules are available at CTrail.com.

Representative Rebimbas can be reached by email at Rosa.Rebimbas@housegop.ct.gov

Senator Hartley can be reached at Hartley@senatedems.ct.gov and Rep. Reyes can be emailed at Geraldo.Reyes@cga.ct.gov