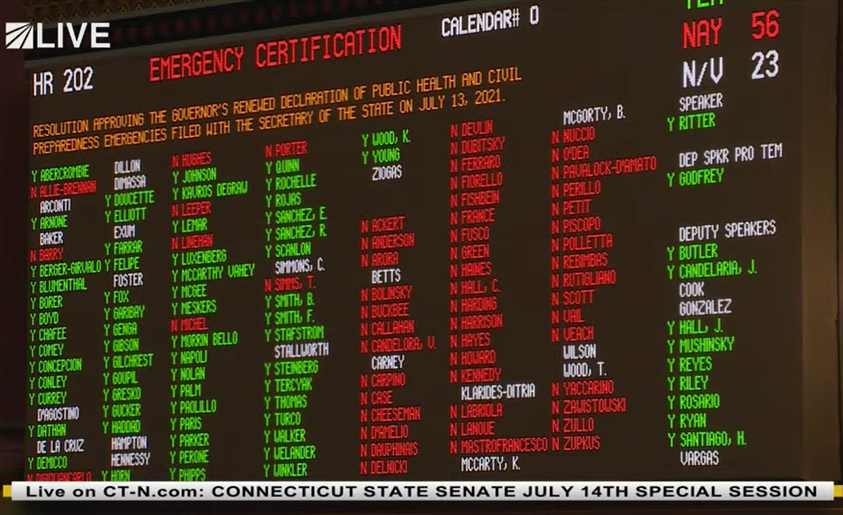 During a special legislative session on Wednesday, July 14, 2021, State Representative John Piscopo (R-76) voted in opposition to H.R. 202, a resolution that would allow Governor Lamont to continue to run the state through his use of executive order until September 30, 2021.

“Connecticut is no longer in a state of emergency as we were in nearly a year ago during the height of the pandemic. Another round of emergency orders at this time that grants the governor near-unilateral control of the state is just uncalled for,” Rep. Piscopo said. “It’s important to point out that this extension is not driven by the actual threat of Covid-19 or a state of emergency, but instead as a workaround to federal rules to continue a steady stream of federal Covid-19 funds flowing into the state.”

“There is no reason why we as elected officials can’t be called into special session to vote on what is best for the people of this state, which is what our constituents elected us to do in the first place. No amount of money should change that,” Rep. Piscopo added.

At the moment, twenty-four states have either terminated or allowed their emergency powers to expire, with Colorado, Alabama, and Maryland doing so just this month. Connecticut and Rhode Island remain the only two New England states where these powers are still actively in place.

It has been stated that without the continuation of these executive orders Connecticut could risk jeopardizing federal funding for the Supplemental Nutrition Assistance Program (SNAP) among others. However, states like Kansas, Pennsylvania, and Wisconsin allowed their executive orders to lapse and sought assistance from President Biden to negotiate the continuation of this funding successfully.

Despite unanimous opposition to this extension from House Republicans and nine House Democrats, the House voted 73-56 in favor of allowing the governor to continue his executive authority. This authorization is the sixth extension of this authority since the original declaration went into effect on March 10, 2020.