HARTFORD – Marking Manufacturing Month in Connecticut, State Rep. John Piscopo (R-76) recently attended the 75th anniversary celebration of the Acorn Button Club. During the festivities, Piscopo had the opportunity to meet with club members and hear about the rich state history of the club, rooted in Connecticut manufacturing. 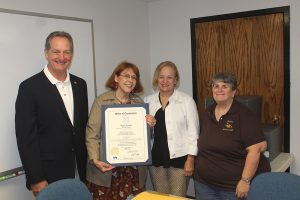 “I am proud to congratulate this wonderful group on 75 amazing years of keeping an important part of our state history,” said Rep. Piscopo, who presented the club with an official citation from the Connecticut General Assembly. “Connecticut’s rich history is rooted in manufacturing, and that includes buttons, which are very unique. Each button has a history all its own. It tells a story of the wearer and the point in time that it was worn, and collectively, they give an account of times past. I’m thankful to the members of this club for their dedication in preserving our history and I wish them continued success.”

According to Acorn Button Club President Laurel Durso, the Connecticut State Library houses the John H. Tingue button collection consisting of 90,000 buttons. Tingue had donated them in 1884 to the CT State Agricultural Society, where they remained in storage for 58 years. In 1942, the Acorn Button Society helped to clean and remount the buttons, which were then donated to the State Library. In 1975, members of the Acorn Button Club again helped to refurbish the button collection.

This year, the Acorn Button Club is celebrating its 75th anniversary. Two current members were part of the group in 1975, working on the collection. Connecticut is very rich in button history. One of the first button manufactures of pewter buttons in the late 1700’s were the Grilley Brothers in Waterbury. Button companies were located in all CT counties. Today, four local clubs located across the state carry on the tradition.

For more information about the club, along with the history of button manufacturing in Connecticut, visit www.connecticutstatebuttonsociety.org.