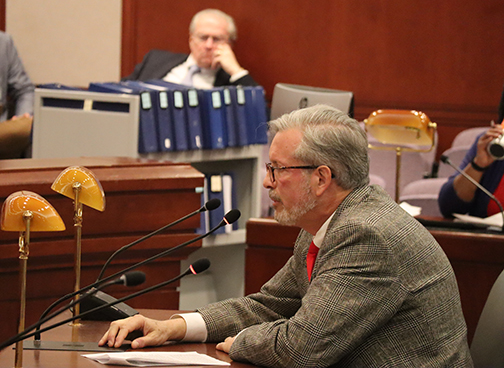 HARTFORD –State Representative William A. Petit Jr. (R-22) testified in front of the Judiciary Committee last month in support of two bill proposals that would have increased public safety and the continuation of victim’s rights by reforming the state’s current Earned Risk Reduction Credit Program.

The bills, HB-5525, would have required inmates complete eligible programs in order to earn risk reduction credits. Anyone who fails to adhere to the plan, or tests positive on a drug test would face a loss of any or all earned credits. HB-5527, sought to prohibit certain serious felonies such as; murder, sexual assault, burglary, robbery, manslaughter, kidnapping, and arson from being counted toward the earned risk reduction credit program.

“House Bill 5525 and 5527 are an attempt to ensure that these programs truly measure serious attempts by those incarcerated to better themselves and earn credits that are appropriate for the individual inmates,” Rep. Petit said. “Victims have rights that are well enunciated in our constitution and I feel it is the primary role of government to protect the public.”

The Risk Reduction Credit Program was established by the legislature in 2011 as a way to promote good behavior among those housed within our  correctional facility. Prior to February 1st, 2016, all inmates qualified to receive a reduction of five days off their sentence per month, regardless of their security risk level.

Two years later, the General Assembly amended the Risk Reduction Earned Credit program to require inmates who have been convicted of one or more violent crimes serve 85% of their sentence before being able to utilize risk reduction credits toward a reduced sentence. Anyone classified as a security risk level four will receive three days per month, risk level two and three offenders will earn four days per month.  Offenders with an overall risk level of one will still receive five days of credit per month.