Join Rep. O’Dea for Pizza and Politics on Wednesday, July 28! 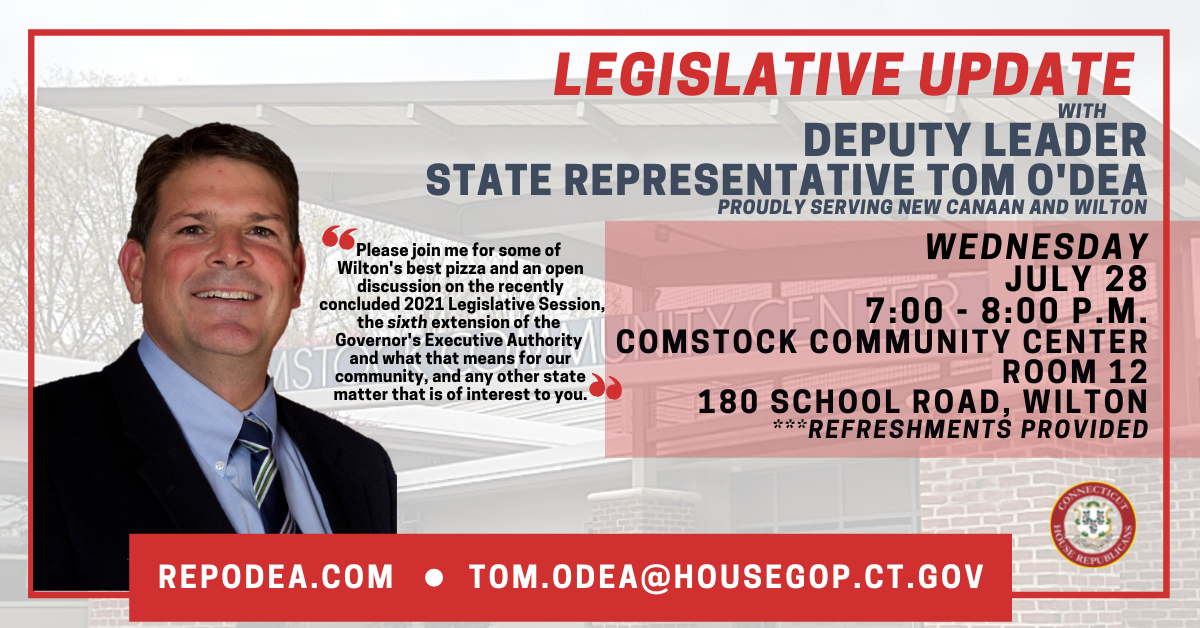 Please join me for a legislative update town hall-style meeting THIS WEDNESDAY, July 28 at the Comstock Community Center at 180 School Road in Wilton from 7:00 PM – 8:00 PM.

Pizza will be provided!

We will be discussing the recently concluded 2021 legislative session, as well as the special sessions on marijuana and the extension of Governor Lamont’s emergency powers. See below for more information on some of the major bills/legislation. I hope you can join us!

In preparation for this week’s town hall meeting, I’d like to share brief descriptions of some of the major bills from the 2021 regular and special sessions. Please see below:

Workers’ Comp Bill (HB 660) – Expands certain workers’ compensation benefits to EMS professionals, dispatchers, all Department of Corrections personnel, and certain healthcare workers (such as nursing home staff) who suffer from PTSD after witnessing injury to, or the death of, a person during the line of service. Benefits for healthcare professional listed above are limited to COVID-related incidents.

Domestic Violence Bill (HB 6520) – Helps victims of domestic violence who are worried about the financial repercussions of leaving an abusive partner. While this bill only passed in the House and was not called for a vote in the Senate, I hope to bring this legislation before the legislature again next year.

NARCAN/Police Bill (SB 1011) – Adds opioid antagonist training requirements for law enforcement officers so they are more equipped to respond to an overdose.

Zoning Bill (HB 6107) – Requires local zoning ordinances to allow accessory dwelling units on homes and disregard per unit parking, allowing for more development of affordable housing in residential neighborhoods. Towns would not have to approve these usages and could only ‘opt-out’ with a two-thirds vote of both the Zoning Commission and governing body. The bill also revises the General Statutes to prevent towns from citing “local character” as a justification when crafting their zoning regulations, potentially threatening a community’s historic architecture.

JANUS Bill (SB 908) – Reverses the 2019 US Supreme Court JANUS ruling, which protected workers from paying union dues when they do not wish to join one. This bill, which is now law in Connecticut, gives unions unfettered access to public employees within the workplace, blurring the lines between their work on behalf of the taxpayers, and union activities.

Mileage Tax Bill (HB 6688) – Creates a mileage tax on trucks in Connecticut. While this tax would not be charged directly to residents, the extra cost to trucking companies, and by extension, Connecticut businesses, would ultimately be passed onto consumers.

State Budget (HB 6689) – While not perfect, this budget does avoid tax increases by relying on the Rainy Day Fund (a 2017 Republican initiative) and federal COVID relief money. This budget increased PILOT funding and Education Cost Sharing (ECS) appropriations, and pays down some of our state’s pension obligations. It also increases state spending, which could be problematic in future budget sessions when we can no longer rely on federal assistance.

State Budget Implementer (SB 1202) – This 837-page document was presented to us in the eleventh-hour and contain many items that should have been voted on as separate bills. The implementer provides the means (revenue) to implement the state budget (above). There were sections of the implementer that had bipartisan support, such as expanding the CRISIS Initiative to combat the opioid crisis, but also bad sections, such as reducing funding for the state’s Contracting Standards Board, which ensures a competitive bidding process for state contracts.

The marijuana bill (SB 1201) – Legalized recreational cannabis in CT. The bill has little to do with personal choice and more to do with big business and special favors. A newly-formed council will determine who has priority access to this new industry, including licensing, and by FY 2029, all revenue collected will be diverted from the state’s general fund, out of the legislature’s control.

Extension of Governor’s Emergency powers – Extends the governor’s emergency powers to September 30, 2021. This is the sixth extension of these powers, and many, including myself, have questioned the need for it given the state’s high vaccination rates, relatively low infection and COVID-related hospitalization rates, and the ability of local governments and school boards to manage the situation. We have also learned that it is possible to access federal emergency funding without the use of an emergency declaration, which should address some concerns about forfeiting this assistance if we allow the declaration to expire. Below is a summary of previous extensions granted by majority Democratic legislators since the pandemic began last year: