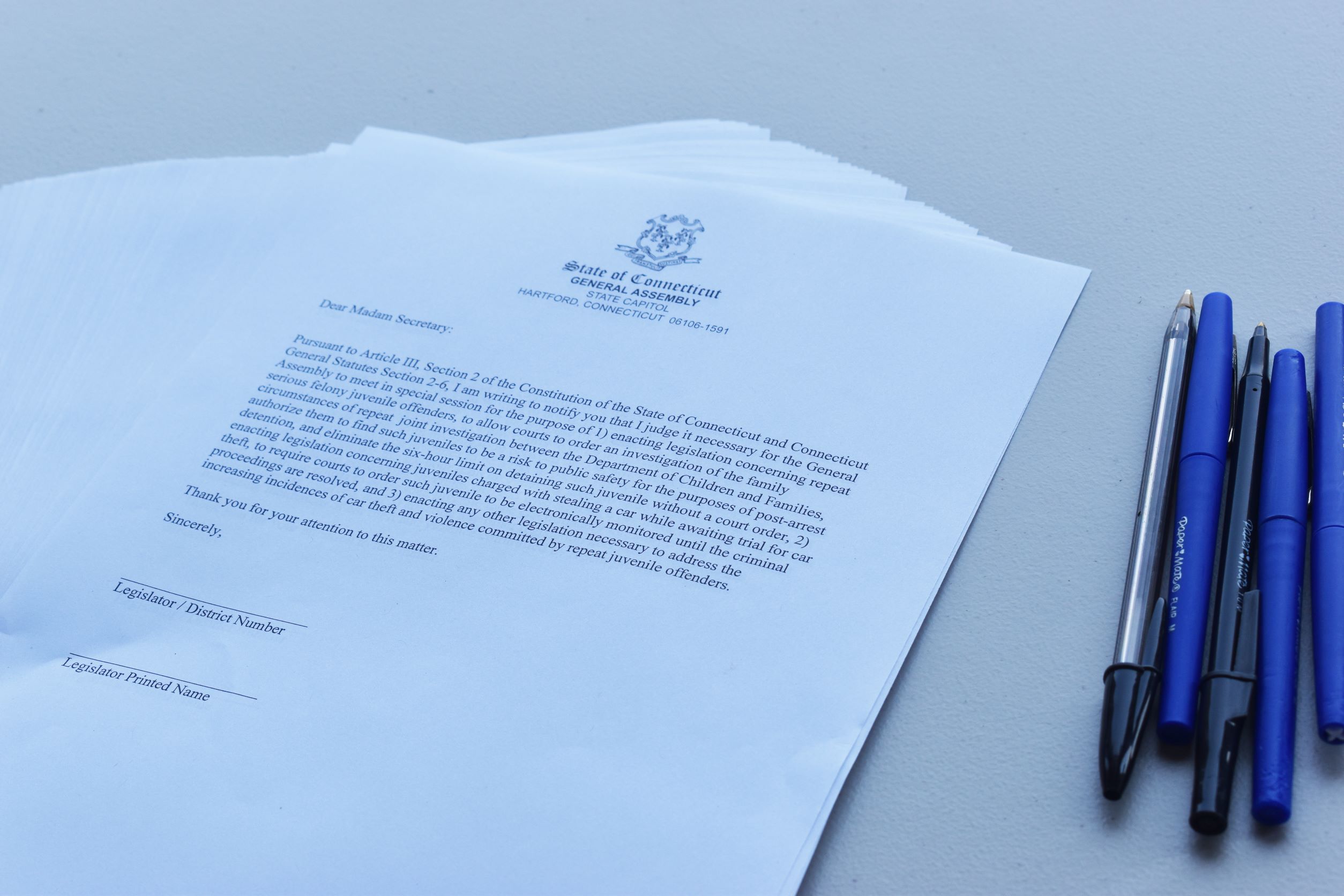 HARTFORD—Deputy House Republican Leader Jason Perillo (R-113) and Assistant Leader Ben McGorty (R-122) joined House Republicans on Wednesday to kickstart the call for immediate legislative action on the juvenile crime crisis that has gripped communities throughout the state, officially launching a petition effort to bring all state lawmakers into session to implement reforms. The lawmakers were joined by local police chiefs, municipal leaders, and citizen activists who are concerned about the recent spike in repeat juvenile car thefts where one instance resulted in the death of a pedestrian who was hit by a stolen vehicle.

“Just weeks ago I warned my colleagues that if we did not act immediately, someone was going to get hurt, and someone was going to die. I can’t possibly express in words how devastated I am that it has come to this. Peoples’ lives were at stake and now an innocent man has been killed,” said Rep. Perillo. “To those who are hesitant to act on this, I simply remind you that we are not out to ruin anyone’s life, but we are looking for accountability. We need young people to understand that there are consequences, and we also believe in the role of intervention both at the state, local, and family level. I am worried about the residents of Shelton and those across the state, I am worried about local law enforcement who are doing their best to address this very serious problem, and I am worried about teenagers who are also putting themselves in danger. Please, to those still on the fence – work with us. Talk to us. We can find a solution that works and one that is fair, but we need to do it now. No more waiting, because the public is demanding answers.”

“When you have an individual go out and commit a car theft that ends in the death of an innocent bystander, that is a serious issue. But for that same individual to have been arrested in 13 prior incidents by the age of 17 and still go on to commit a violent offense that results in a tragic loss of life — that’s a big red flag that the laws designed to deter juvenile crime aren’t working,” Rep. McGorty said. “The laws governing our juvenile justice system need to be fixed and there needs to be accountability to the victim of this crime and their family that this situation could have been prevented.”

House Republican leaders were among the more than 40 members of the House Republican caucus who attended a news conference at the capitol, where they were joined by chief elected officials and top law enforcement officials from New Britain and Wolcott—the sites of crimes last week that intensified the spotlight on the state’s juvenile justice system. The crime in New Britain, where a 53-year-old pedestrian was killed when he was struck by a stolen vehicle, raised alarm statewide when it was revealed that a 17-year-old charged in connection with the crime had been arrested 13 times in less than four years.

Addressing motor vehicle thefts by juveniles was a top priority for House Republicans heading into the legislative session in January. Ultimately, majority party lawmakers would not act on Republican proposals to hold juveniles—repeat offenders, in particular—accountable for the serious criminal acts they commit.