SOUTHINGTON – State Sen. Rob Sampson (R-16) along with State Reps. John Fusco (R-81) and Gale Mastrofrancesco (R-80) met with constituents on Wednesday night at the Southington Town Hall for their Town Hall Forum to hear about issues impacting Southington and the rest of Connecticut. 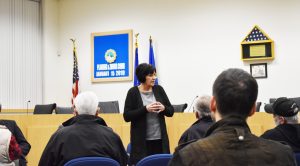 The three lawmakers provided a legislative update on the major proposals to be debated this year. Residents expressed their concerns about the transportation infrastructure, proposals to allow Election Day registration, efforts to end the Electoral College, plans to consolidate the state community college system and taxes.

Additionally, all three legislators discussed their opposition to provide state-backed no interest loans to federal workers due to the D.C. federal shutdown which falls on the backs of all the state taxpayers.

“I want to thank everyone who attended our town hall. I look forward to serving my first term and will continue to fight for the campaign promises I made of limited government, controlling state spending, and reducing the tax burden on our citizens and businesses.,” said Rep. Mastrofrancesco.  “So far this session, the Democrats have proposed a statewide property tax, an increase in the sales tax, a grocery tax and a plan to regionalize our wonderful and efficient school districts with other school districts. I will oppose all of these bad bills and any proposal which hurts the taxpayers of Southington.”

“It’s always good to meet with constituents in Southington,” said Sen. Sampson. “They’re grounded, common sense was a welcome relief compared to the ideas floating around the Capitol. Representative Fusco, Representative Mastrofrancesco, and I will continue to fight for the constitutional principles of liberty and  limited government and against foolish ideas like a grocery tax and forced school district consolidation.”

“I am encouraged by our conversations.  My colleagues and I will continue our efforts towards a better Connecticut by offering constructive alternatives to the decades-long, ineffective solutions we’ve seen attributed to the major issues facing our state.” Rep. Fusco said. “Unfortunately, there are already several proposals to raise or create dozens of new taxes on everything from groceries to medicines. We must restrain spending and provide relief to the taxpayers of Southington and our state.”

Sen. Sampson, along with Reps. Fusco and Mastrofrancesco assured everyone in attendance that they plan to keep their constituents informed throughout the session.