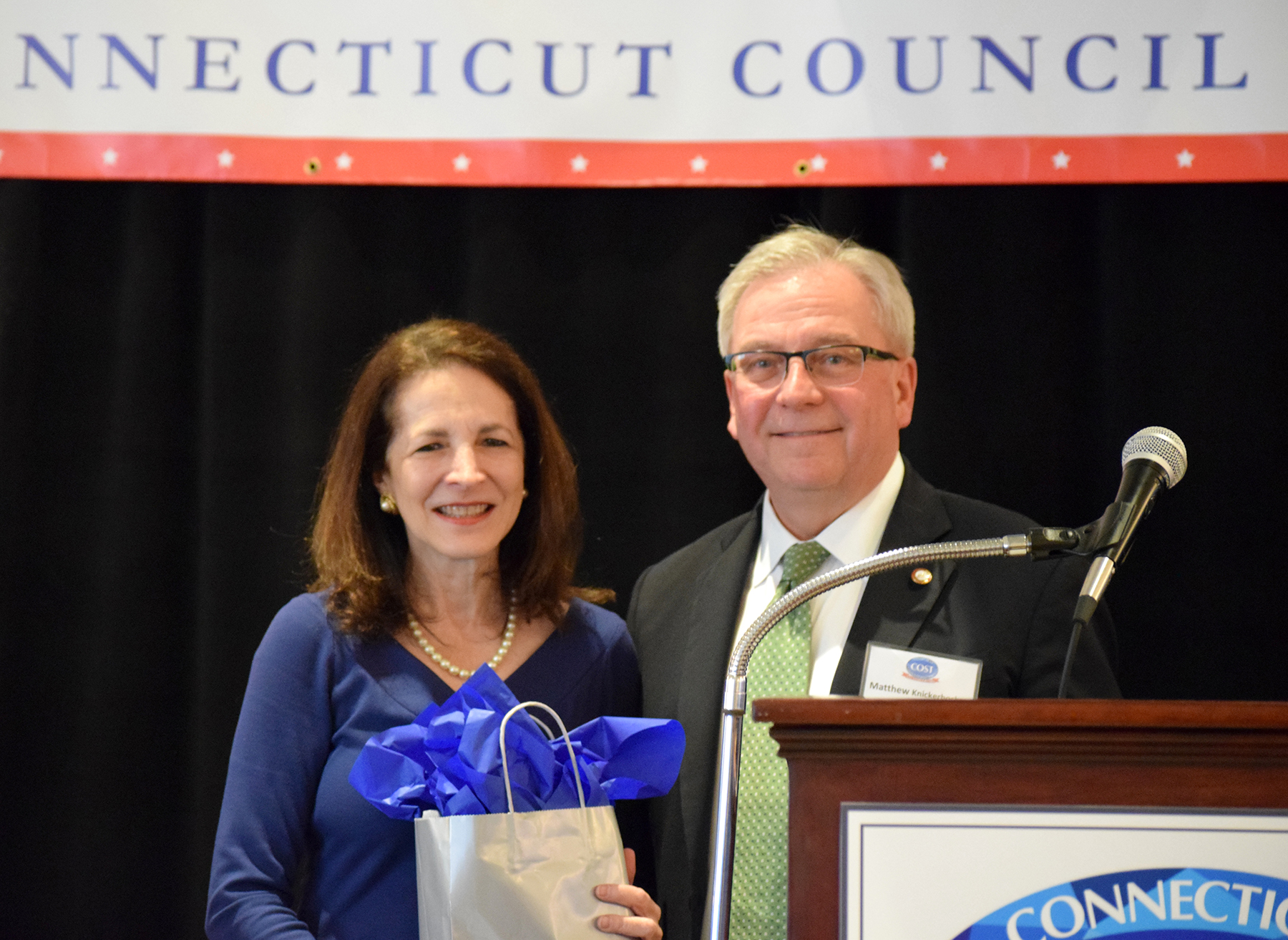 HARTFORD – State Representative Gail Lavielle (R-Wilton), Ranking Member of the legislature’s Appropriations Committee, was honored by the Connecticut Council of Small Towns (COST) with its Town Crier Award, which recognizes lawmakers and municipal officials who have taken a leadership role in advocating for public policies that benefit Connecticut’s small towns.

Matt Knickerbocker, First Selectman of Bethel and Secretary of COST, presented the award. The presentation of the award took place this morning at COST’s 2020 Connecticut Town Meeting at the Aqua Turf Club in Plantsville, where Rep. Lavielle also participated in a legislative issues forum.

“Rep. Lavielle was chosen as a recipient due to her outstanding leadership on legislation affecting Connecticut’s small towns – in particular, her efforts to defeat legislation that would have forced the consolidation of small school districts throughout Connecticut,” said Elizabeth Gara, Executive Director of COST. “In addition, the award recognizes her efforts to support fair share funding for small towns, enact meaningful mandate relief, and address the need for a statewide fracking ban. COST is very appreciative of her efforts on these issues as well as other legislation affecting Connecticut’s small towns.”

“I am very grateful for this recognition and I thank the Connecticut Council of Small Towns for all it does on behalf of our local governments,” said Rep. Lavielle. “Its stewardship and continued support help municipalities maintain a strong voice on issues directly affecting their residents. It’s important that we continue to protect their autonomy because, as we saw last year in the debate on mandated school regionalization, people in Connecticut hold very dear their ability to make local decisions about matters like education, zoning, and how their property taxes are spent. Congratulations to my fellow COST award recipients and thanks for everything they do for Connecticut’s towns.”

Rep. Lavielle played a leadership role in the successful opposition against proposed legislation during the 2019 session that would have opened the door to mandated consolidation and redistricting of school districts across Connecticut. As Ranking Member of the Appropriations Committee, Rep. Lavielle is a longtime advocate for smart budgeting and fiscal responsibility, stating that years of wasteful government spending and excessive taxation has created a lack of trust in state government and adversely affected towns that actually live within their means. She has also worked to reduce unfunded mandates on Connecticut municipalities, and has been widely recognized as a strong advocate for environmental protection.