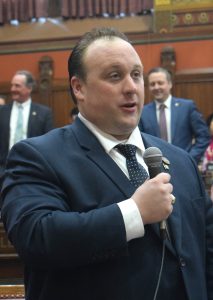 “I’m honored to join my colleagues on the Conservative Caucus to continue working on bringing the common sense ideals of smaller government, personal responsibility and individual freedom to the people of Connecticut,” Rep. Lanoue said. “Our state continues to struggle to fill another massive budget deficit, taxes keep going up and many of the policies being put in place are driving people and businesses out.  It’s time to stand up for the people of Connecticut, hold the line on state spending, stop kicking the can down the road and find solutions to the state’s problems.”

The Connecticut General Assembly Conservative Caucus is a group of Connecticut legislators dedicated to the principles of limited government, economic freedom and individual liberty. Its members foster open debate about the role of government in society, adherence to the Constitution, and the rule of law. They propose and advocate for legislation that promotes the freedoms, individual rights, and prosperity of all Americans.

“In the first two months of session, Representative Lanoue has already demonstrated his conservative principles in both the legislation he has proposed as well as the strong advocacy while providing testimony during public hearings,” Caucus Chairman Rep. Mike France (R-80) said. “As a small business owner, he brings invaluable experience to the caucus and we’re excited that he will provide his input and perspective on the important issues facing our state this session and into the future.”