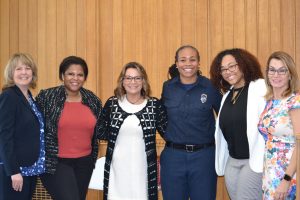 HARTFORD – State Representatives Themis Klarides and Nicole Klarides-Ditria were invited to speak on the  “Women Who Lead” Panel by the Commission on Equity and Opportunity and the Commission on Women, Children and Seniors on Friday. The topic of the panel was “The Multigenerational Impact of Women that”.

Reps. Klarides, Klarides-Ditria and the other panelist spoke to young women about their experiences and how they became leaders.

Rep. Klarides said “The active role that these young women are taking in both their education and community reaffirms my faith in our youth. These future leaders will be role models for generations to come as they continue to discover their voices and passions in life and public service.  It is imperative that we have leaders that reflect our communities and everyone has representation. Thank you to the members and organizers of Women Who Lead, the Commission on Equity and Opportunity and the Commission on Women, Children and Seniors.”

Rep. Klarides-Ditria added, “Be yourself, work hard, and don’t let anyone push you around,” added Rep. Klarides-Ditria. “This is something my mother taught us at an early age and are values we follow today. I never thought I was going to be where I am today but having good women role models in your life and being confident in yourself will help you achieve anything you want in this world.”

Following the statewide elections in 2014, Rep. Klarides was unanimously chosen by her colleagues in the House Republican Caucus to be the Caucus Leader – the first woman to hold the position. Rep. Klarides is also the only female caucus leader in the House and Senate.

The other panelist included:

Jestina Gilbert, Founder “I Am Not Afraid”