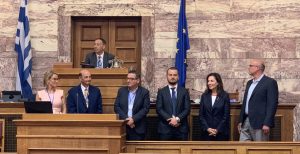 This month ten elected state legislators from around the United States visited Athens as a part of the World Hellenic Inter-Parliamentary Association (WHIA). WHIA is an organization made up of legislators of Greek descent from various parliaments and legislatures from 26 countries from around the world who come together to advocate for Hellenic causes and issues of concern to the Greek diaspora abroad.

“As a member of the U.S. delegation traveling to Athens for the World Hellenic Inter-Parliamentary Association meeting, it was a privilege to work with our counterparts from around the globe to build and expand the Hellenic reach in Greece and throughout the world. As Greek American we take an enormous amount of pride in our heritage, and having a hand in strengthening U.S and Greek relations while building awareness for WHIA is a welcomed opportunity,” said Connecticut House Republican Leader Themis Klarides.

During its meetings at the Hellenic Parliament, the group adopted resolutions that call for:

The World Hellenic Inter-Parliamentary Association (WHIA) is an interparliamentary organisation of the Greek diaspora bringing together legislators of Greek origin from around the world. It was first established in 1996 and was formally established as an Association under Greek law in 2005. The purposes of WHIA pursuant to Article 3 of its Statute are as follows: 1. To Build relations and communication among members of legislator who are of Hellenic origin in non-Greek speaking countries. 2. To strengthen relations of friendship and co-operation between Greece and the respective countries of the Association’s members and their Parliament. 3. To bring forth and promote the principles of Greek language and Hellenic culture in their respective countries. Additionally, one of our core roles as an inter-Parliamentary group is to provide professional development opportunities and networking for our members and associates across the world.