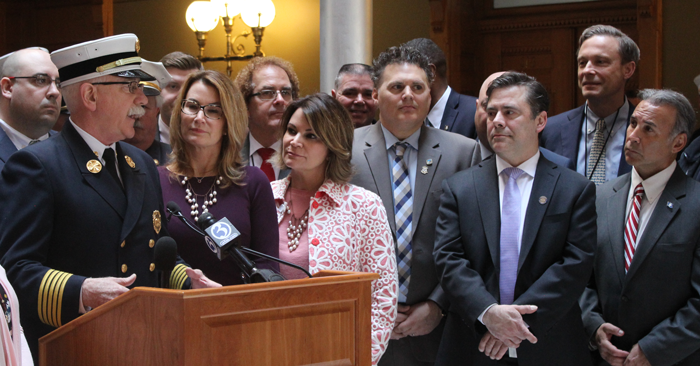 “Gov. Malloy and the Democrats on the state Bond Commission put millions more on the state’s credit card but when it comes to public safety for hundreds of thousands of Connecticut residents there is no money,’’ Klarides said. “We have already committed more than $1.4 million to the fire school but the Democrats in charge have stopped the project and have said it will not go forward.’’

Klarides and other lawmakers representing some of the 22 towns within the Valley Region met with Department of Administrative Services officials recently to update the status of the school. They were shocked to learn from DAS that the governor’s budget office will not provide funding to construct the $14 million facility. More than 650,000 people reside in the 22 Valley Region towns.

Chuck Stankye, past president of the Connecticut State Firefighter Association (CSFA) said it is vitally important that the Valley Fire School be built. “Firefighters need this facility to help them protect the public. When that bell goes off, we are there to save lives and property,’’ he said. Stankye was dismayed following the meeting with DAS but vowed to push the issue.

The fire schools are critical for firefighters to train and maintain certification. The Valley firefighters have to travel around the state for training where operating hours are limited at various firehouses.
“It is outrageous that this school has been mothballed. Instead, the state Bond Commission last week spent millions on non-essential projects,’’ Klarides said. She also noted that last summer Gov. Malloy rammed through the Bond Commission another $10 million for a needless study on tolls after three have already been completed.

The legislature has actually authorized $26 million for fire schools and Klarides and other lawmakers called for the Bond Commission to allocate the needed $14 million from that pool of money. Because the project has languished, the approved 2016 bid for has since expired and it will have to be re-bid. Construction was supposed to be completed by January of 2018 but has never begun.

The fire school plans date to 2002 when the CSFA and the Commission on Fire Prevention and Control created a priority list for construction of new schools. The Valley Fire School was scheduled to be the first one on the list to be built. The Beacon Falls site is shovel ready, Klarides pointed out.

The CSFA and the CFPC on Sept. 14 passed a resolution reaffirming its duties to administer the fire schools and to adhere to the construction schedule. The Valley Fire School is still slated to receive the next round.

“Clearly, the priorities of this administration and the Democrats in the legislature are wrong when it comes to investing in public safety versus spending money on items that some lawmakers would like to have,’’ Klarides said.