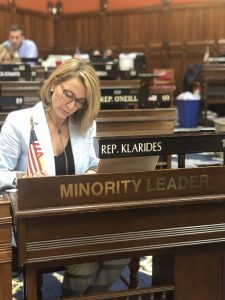 Bill calls for fentanyl to be defined as a “narcotic substance” increasing sentencing to no less than 15 years and/or a $50,000 fine

HARTFORD, CT – State Representatives Themis Klarides and Nicole Klarides-Ditria praised the passage of legislation on Tuesday, May 14th to increase penalties for the dealing and manufacturing of fentanyl and fentanyl derivatives.

House Republican Leader Themis Klarides, submitted this bill in an effort to legislatively address the opioid crisis and curtail the growing use and distribution of fentanyl and fentanyl laced drugs throughout Connecticut. Last August Connecticut made national news when in less than 24 hours 95 individuals overdosed in the City of New Haven, almost all of which took place on the historic New Haven Green Park.

“We need to protect our communities, opioids are destroying the lives of our state and fentanyl has taken this to a new level. When our own police officers and forensic teams have to take extra safety measures when handling fentanyl at a crime scene and have medical responders nearby in case they themselves come in contact with the lethal substance, how can the Senate not call this bill for a vote? Not that long ago, that truck carrying enough fentanyl to kill everyone in this state rolled right through our backyard. I implore our State Senators to call this bill to the floor and vote in favor of protecting all of our citizens from fentanyl,” said Rep. Klarides

“Fentanyl is a dangerous drug that is linked to killing thousands of individuals suffering from drug addiction,” said Rep. Klarides-Ditria, a co-sponsor of the bill. “Making the penalties for selling fentanyl harsh will hopefully deter individuals from selling or manufacturing this dangerous drug.”

Three years ago, state police in Derby pulled over a truck carrying 55 pounds of fentanyl—a narcotic substance that federal drug monitors say is as much as 50 times more powerful than heroin and 100 times more powerful than morphine, the US Center for Disease Control recently declared fentanyl the deadliest drug in America. The seized 55lbs of fentanyl equaled almost 15 million lethal doses; the population of Connecticut is 3.57 million individuals, the driver of the tractor trailer received a sentencing of 30 months in prison. New York (about an hour drive from Derby) has become a national distribution hub for fentanyl, with 35 pounds seized in 2016, to a total of 491 pounds of fentanyl seized in 2017.