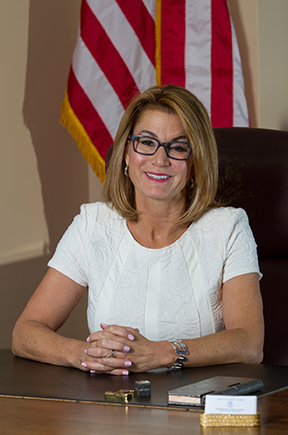 State Representative Themis Klarides is serving in her tenth term representing the 114th House District which includes Woodbridge, Orange and Derby. Following the statewide elections in 2014, her House Republican colleagues unanimously chose her as Caucus Leader – the first woman to hold the position. She was reelected leader again in 2016. She was a Deputy Republican Leader from 2007 through 2014. As Leader, Klarides is a member of the legislature’s committee on Legislative Management.

She continues to be an outspoken leader on issues regarding the state’s finances, job creation, education, taxes and many others.

Rep. Klarides has been active in her community, serving on numerous boards and civic organizations.

Since 2006, she has served on Griffin Hospital’s the Board of Directors and in 2016 was named Second Vice Chairman. She is an outspoken advocate for first responders and public safety personnel including firefighters, police, and emergency medical technicians.

Radiological Society of Connecticut honored her in 2016 for her work in preventable healthcare services for women.

A native of Seymour, Themis Klarides was raised around a family supermarket business that taught her the value of hard work and the rewards of community involvement. Her commitment to these values is exemplified through her years of community service with various municipal, state and regional groups. She is a former member of the Planning and Zoning Commission in Derby, and a former member of the Board of Finance in Seymour.

Themis Klarides is a graduate of Trinity College, where she earned a Bachelor of Arts Degree in Political Science and later graduated from Quinnipiac University School of Law. She is a practicing lawyer in the State of Connecticut and in the United States District Court for Connecticut. She is of Counsel to Bridgeport-based Cohen and Wolf in the firm’s Orange office.